Thanks to DriveShop we were loaned a Kia Sedona SXL vehicle for a week.  No other compensation was provided and all opinions are my own.

As the driver of a 17 year old vehicle, I get excited when I get the opportunity to drive a shiny new one.  Don’t get me wrong, I love my little SUV however, there are times that the cargo space in it just doesn’t work, like when we need to take our daughter to college. 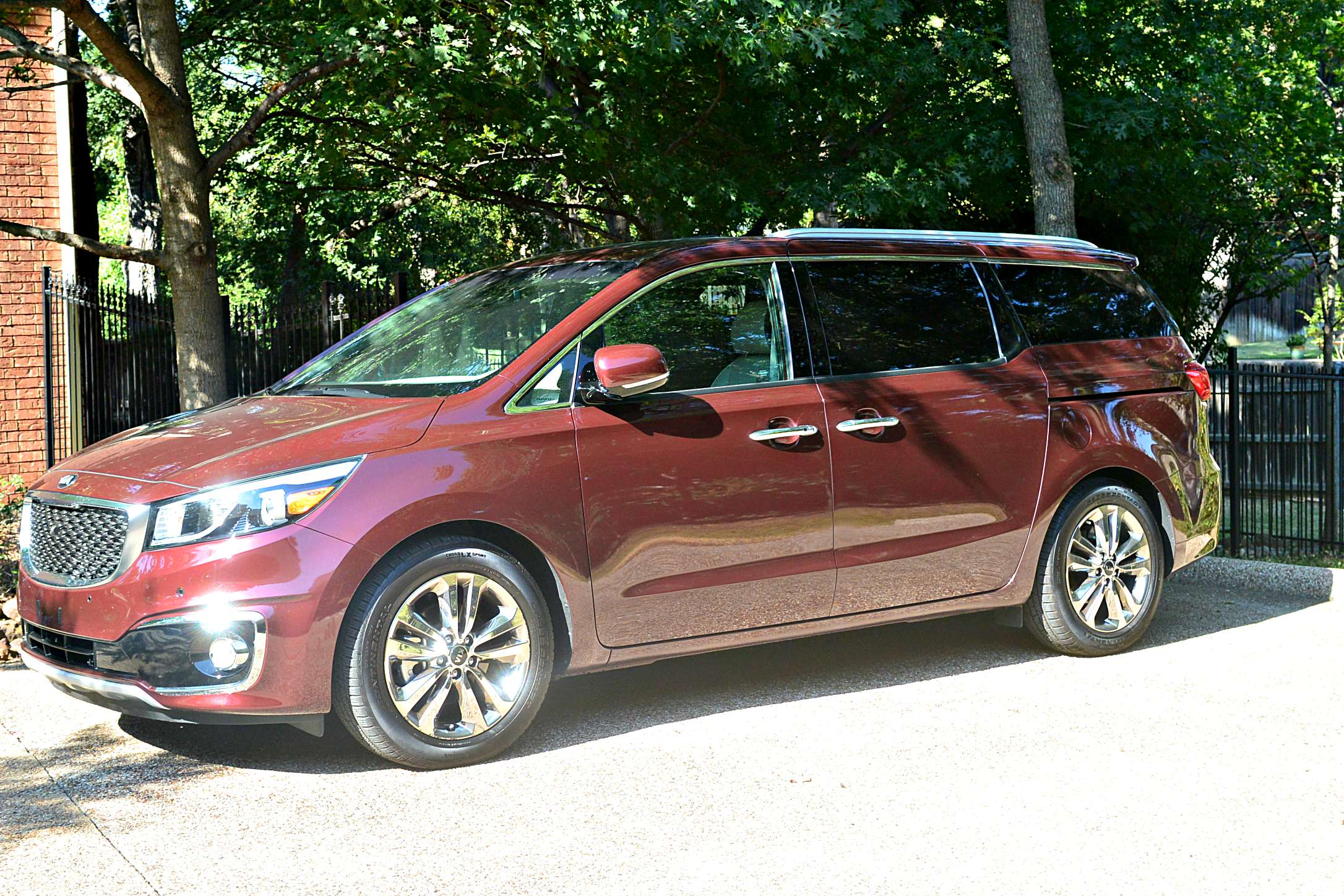 The 2015 Kia Sedona SXL though, can be used like a moving van (within reason folks, we’re not talking king sized beds and 1200 pound wardrobes here), if you don’t have half a soccer team to transport from Point A to Point B.   Even better, I didn’t feel like a soccer mom driving it, which elicits great kudos from me because I always said I would never drive a mini-van (jokes on me here I guess!).

All that aside, I’m writing this review about the 2015 Kia Sedona XL to tell you our week long experience with it, the features we liked about it and a few things that we thought maybe could be improved upon.

We just drove the Sedona SXL around town, so there were no high speeds taking the van out, however the pickup from stop lights and accelerating was impressive for such a large vehicle and we had no trouble picking up speed to pass others while driving.  Interestingly enough I thought the van drove smoothly over the bumps and road imperfections that North Texas is riddled with, however our daughter in the second row captain seat mentioned that she thought it felt really bumpy back there.

We appreciated the Tri-Zone Automatic Climate Control which also has Rear Air Conditioning, so everyone can have their space the temperature they want. 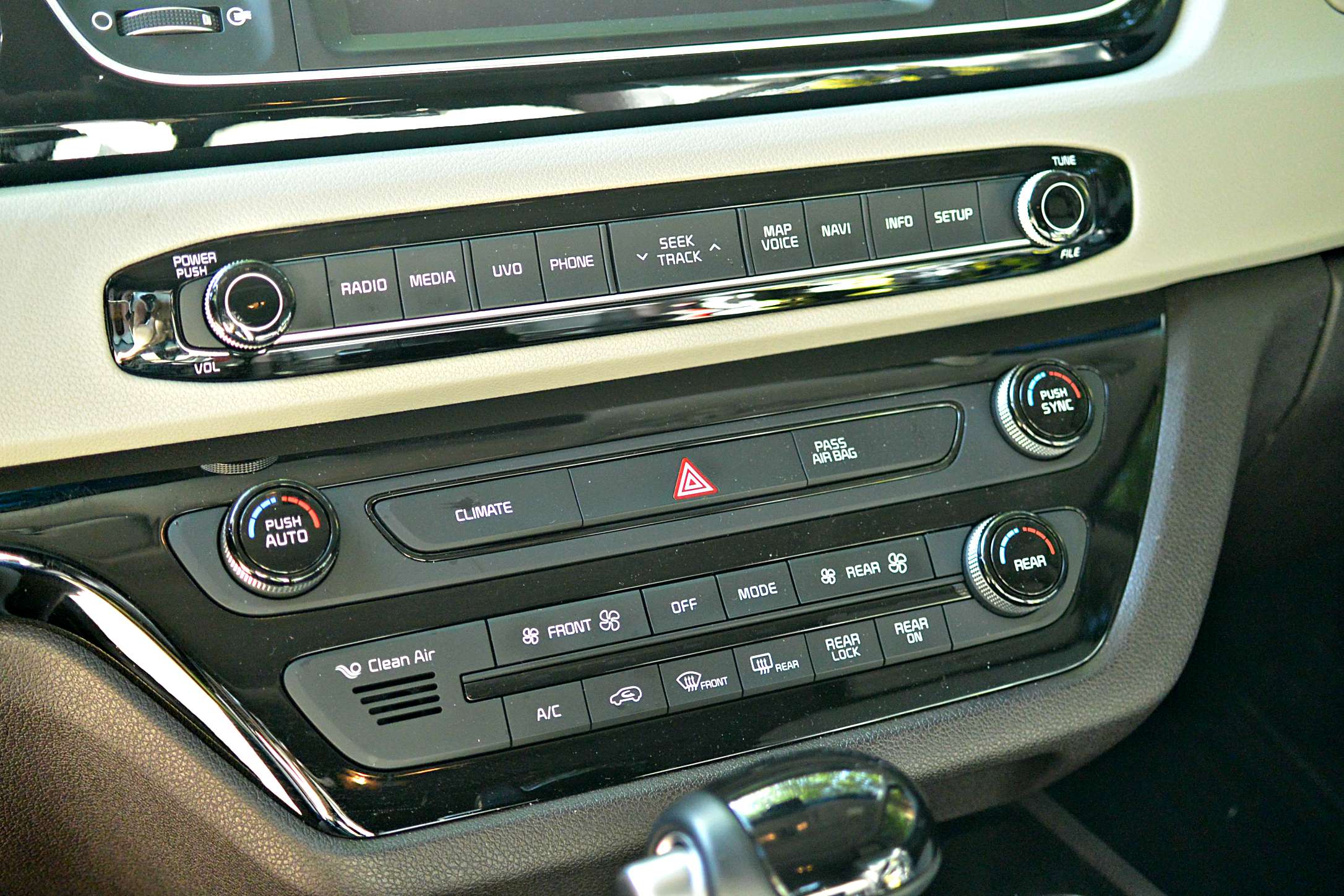 The seating in the Kia Sedona SXL is really nice.  The high-quality Nappa Leather Seat Trim, is nice looking.  The second row boasts First Class Lounge Seating  with captain’s chairs which are really comfortable, allowing for reclining positions and foot rests (lucky kids these days, I didn’t get to travel in such luxury when I was younger!). 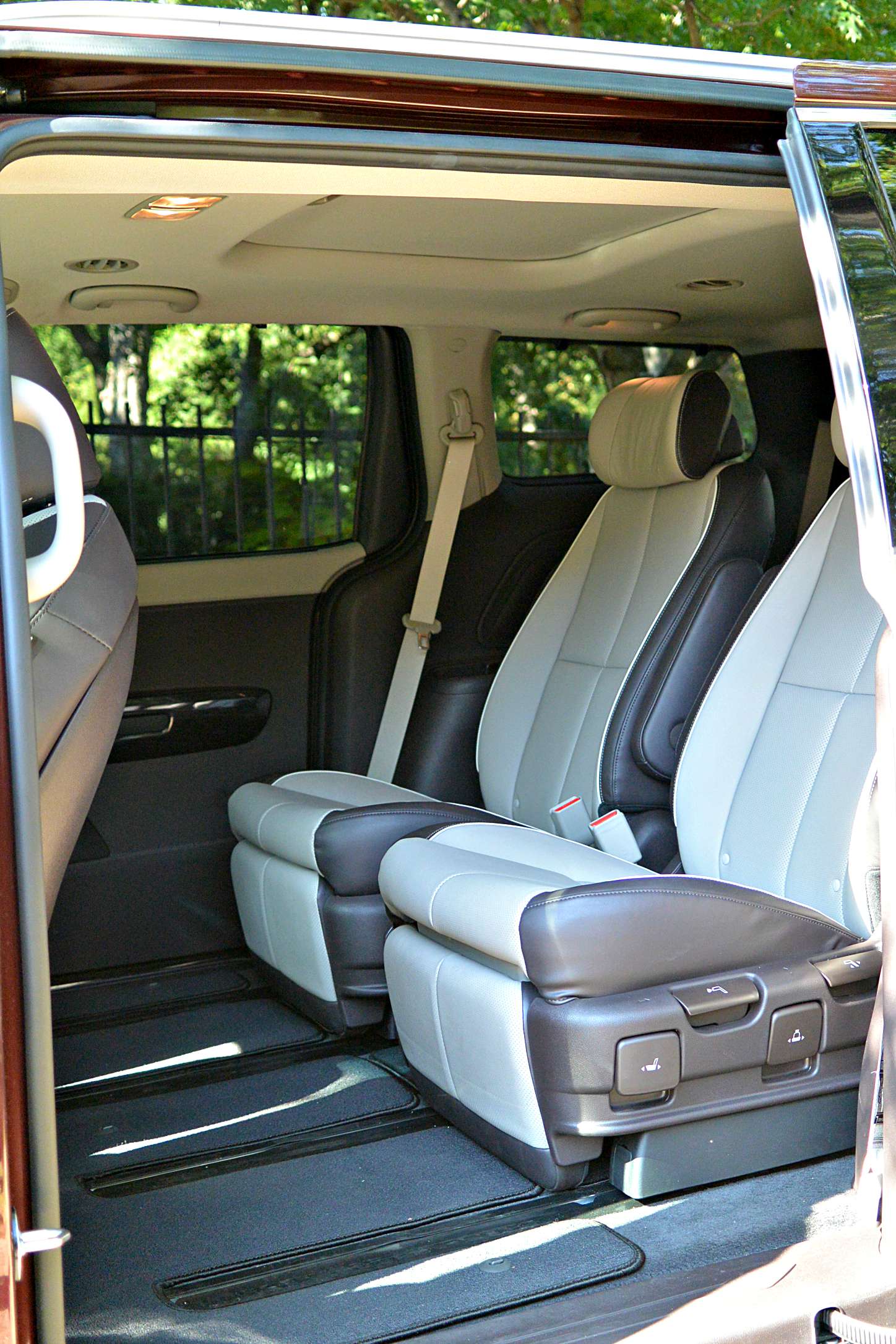 The second row seats slide side to side and the Slide-N-Stow feature lets you fold, slide forward and lock them against the front seats, meaning your space is very flexible and gives you easy access to the third row.  You can have more legroom in the second row or the third row if needed. We never used the third row of seats, so I can’t comment on those other to say the way they Fold-In-The-Floor was great for the extra cargo space we needed for moving. 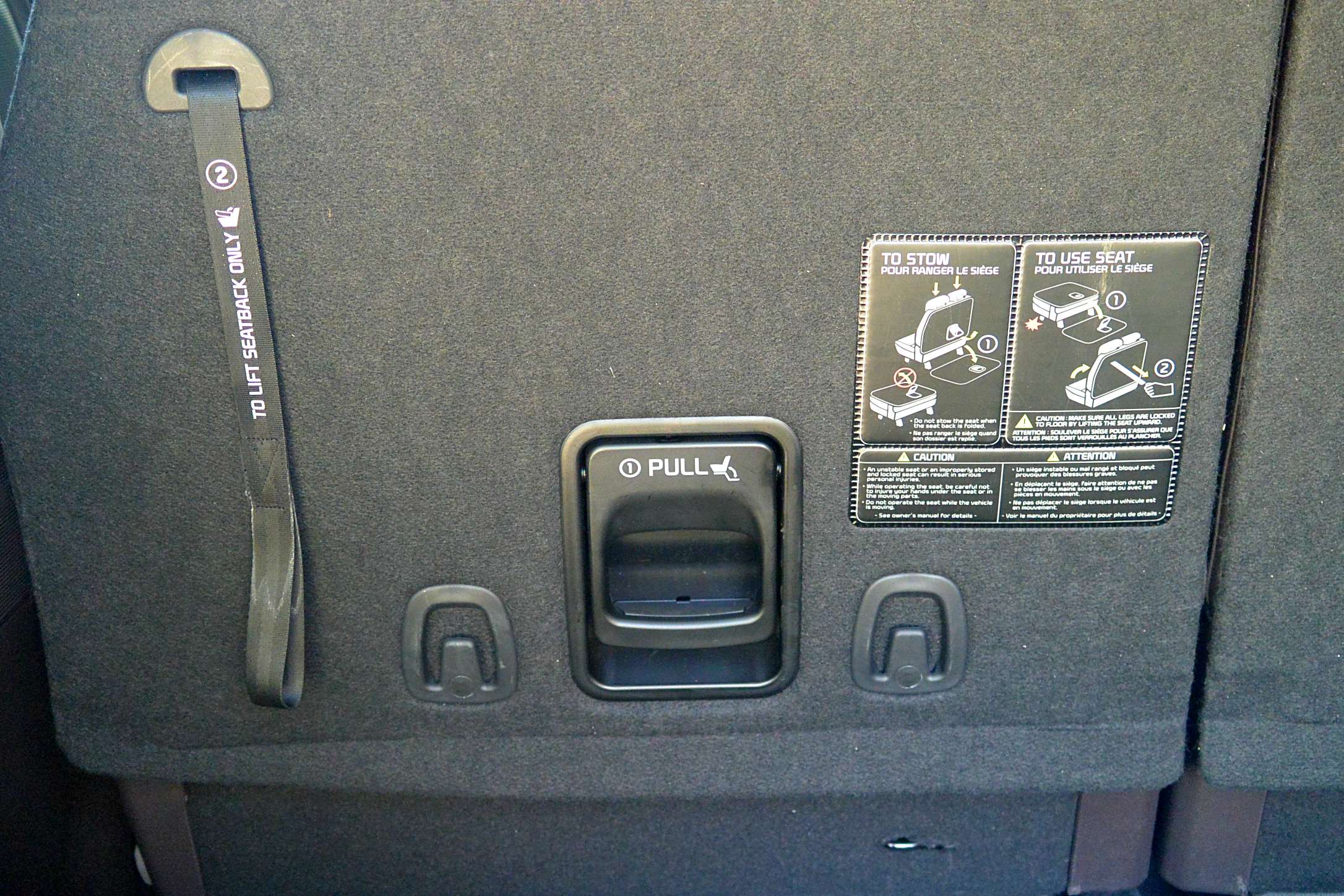 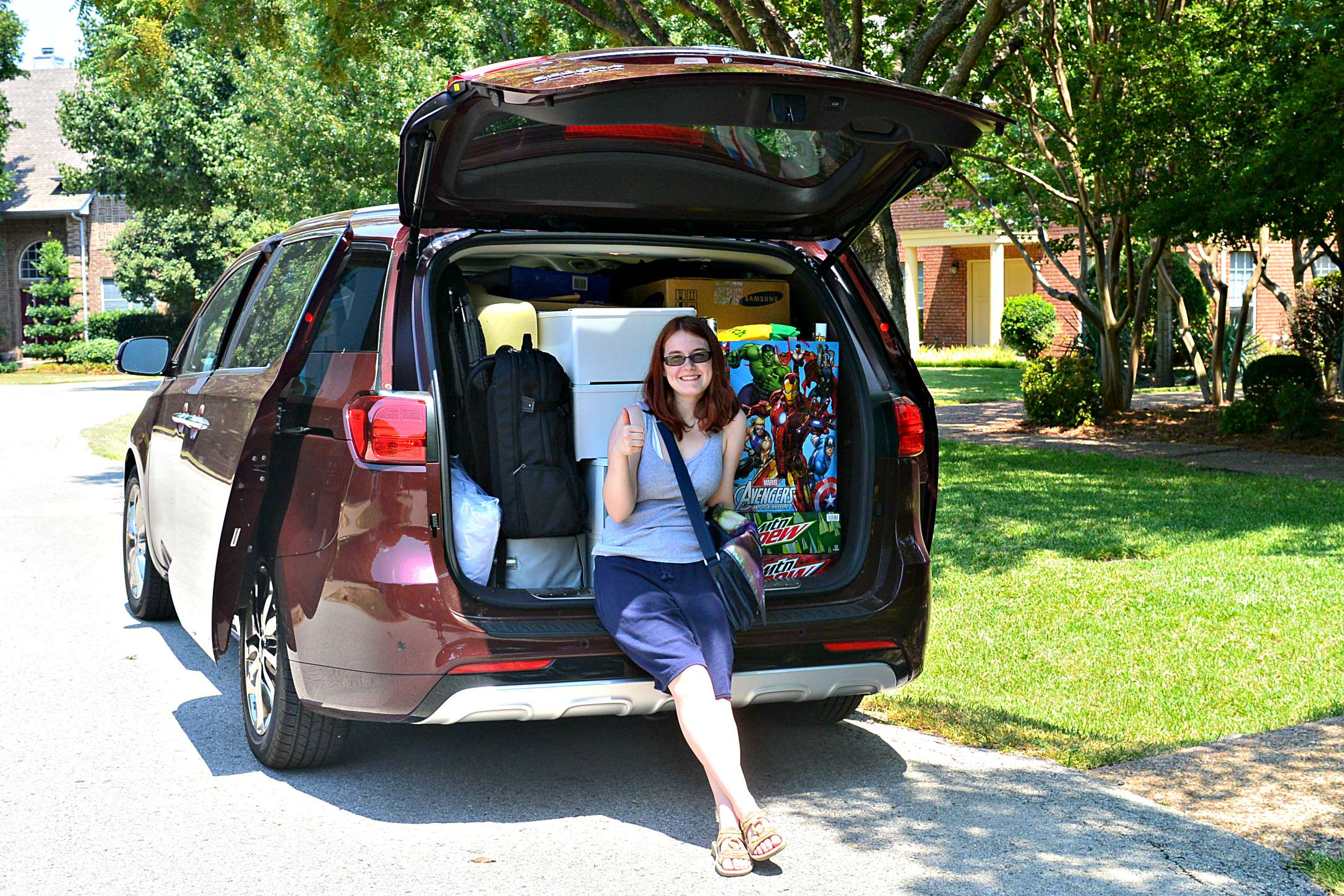 When you’re not putting the third row seats down, there’s a deep storage area as your trunk space.  The narrowness and depth seemed a bit awkward to me, but I do admit the little things please me and the light in this space is a nice touch.   I can imagine it’s extremely handy when it’s dark and you’re trying to find that one last baseball mitt. 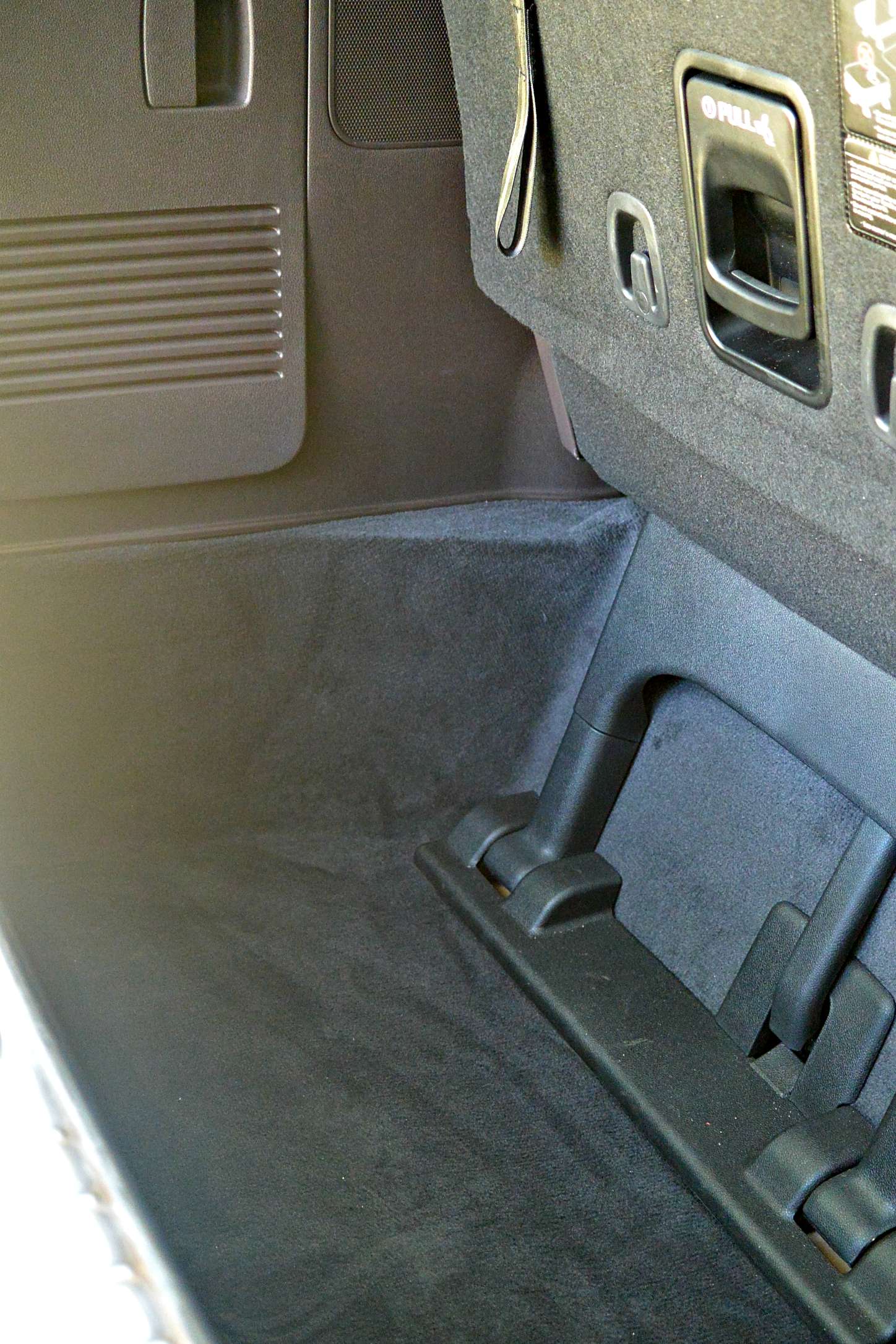 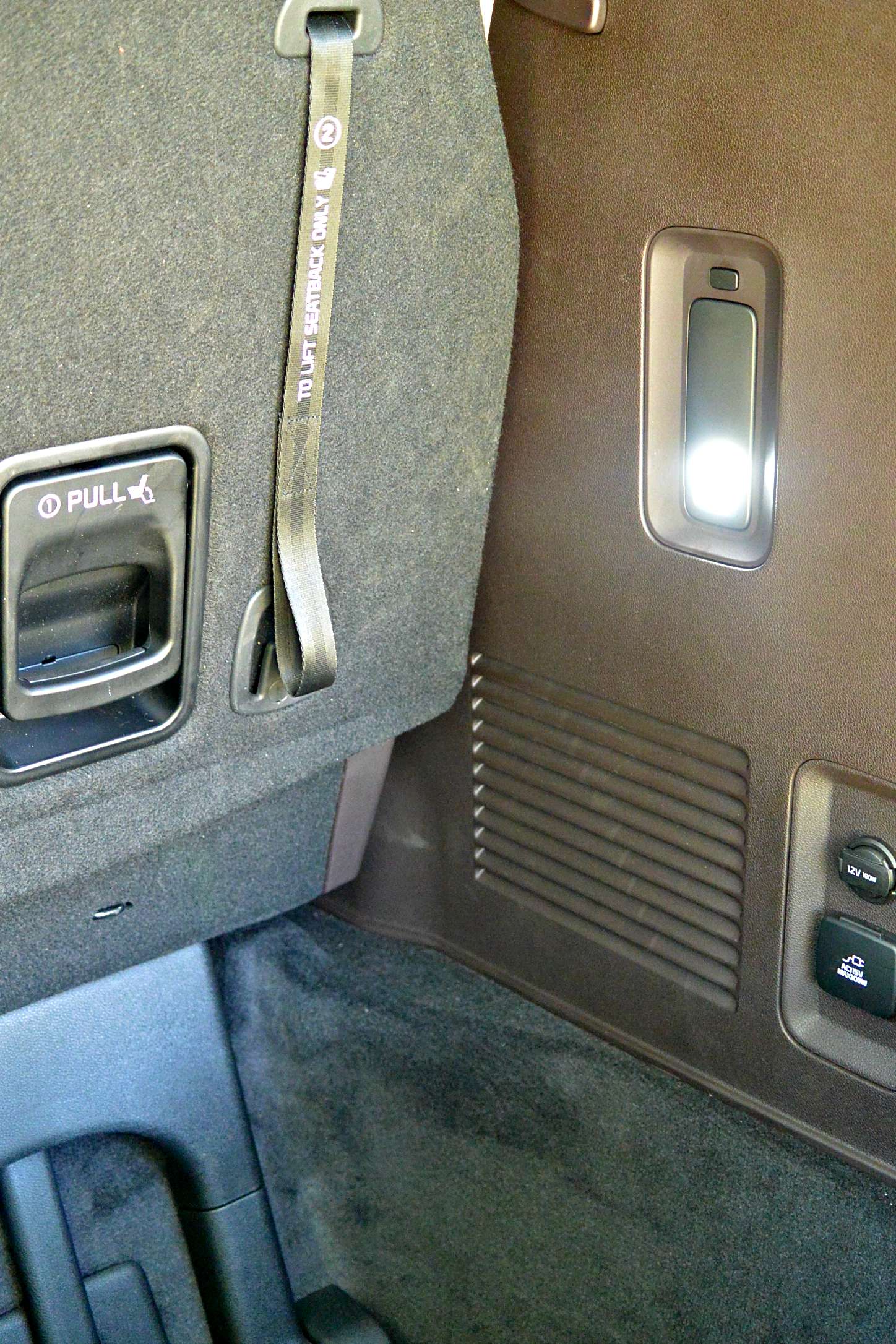 Those of you who don’t know me, I’m short, so I’m always thrilled when I see the Smart Power Tailgate on large vehicles like the Kia Sedona SXL.  It makes the life of the petite so much easier and even if you’d have no troubles reaching up to close that tailgate, anyone who has their hands filled will find value in this convenient feature. 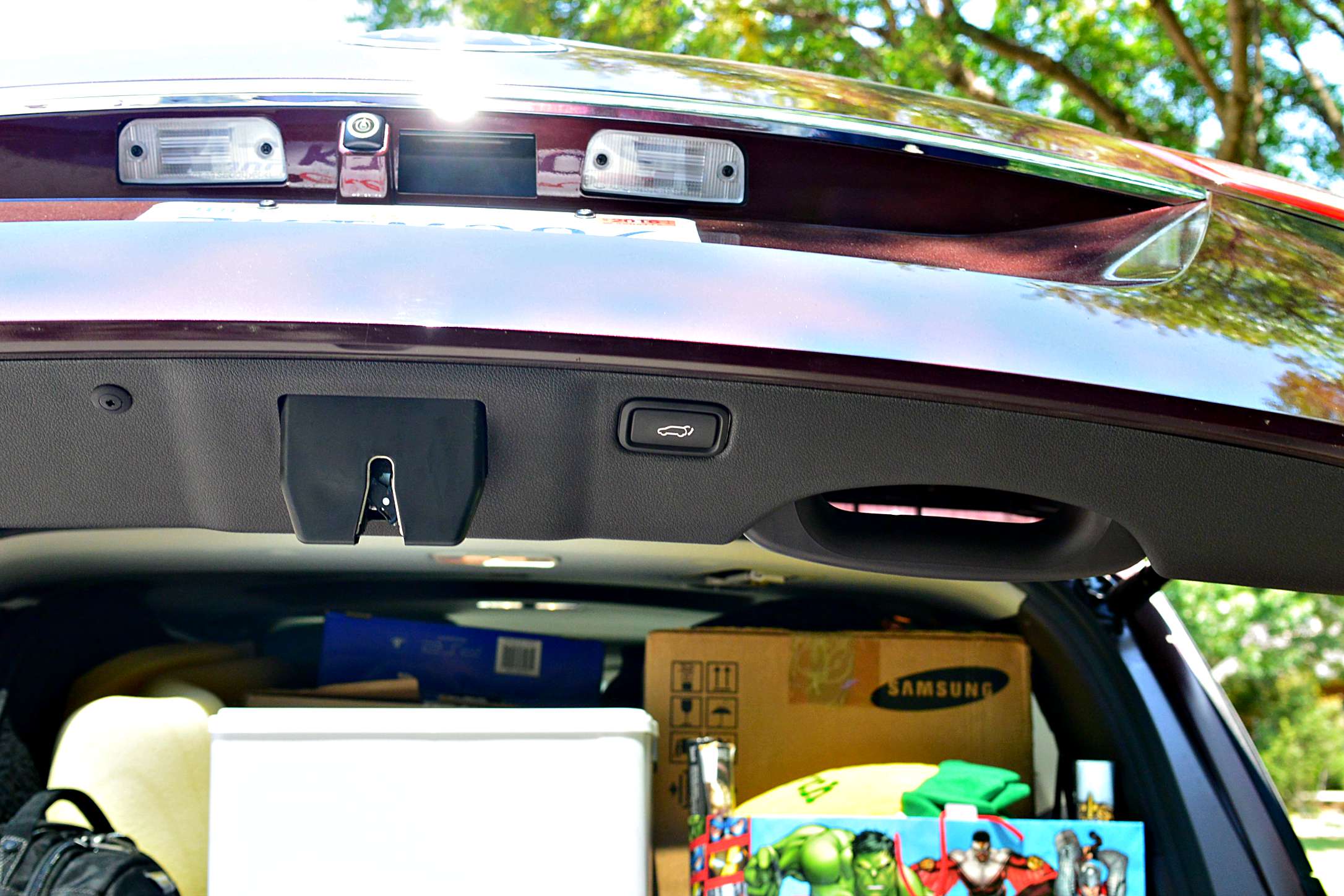 Let’s talk parking though shall we?  I was a bit concerned about that considering the size of the Kia Sedona SXL.  I admit to not being the best at parking to begin with, so with full anxiety I was parking the Sedona at the edge of every lot when I first got it.  Then I found that the miraculous Surround View Monitor camera system (this is an optional feature) makes parking a breeze. 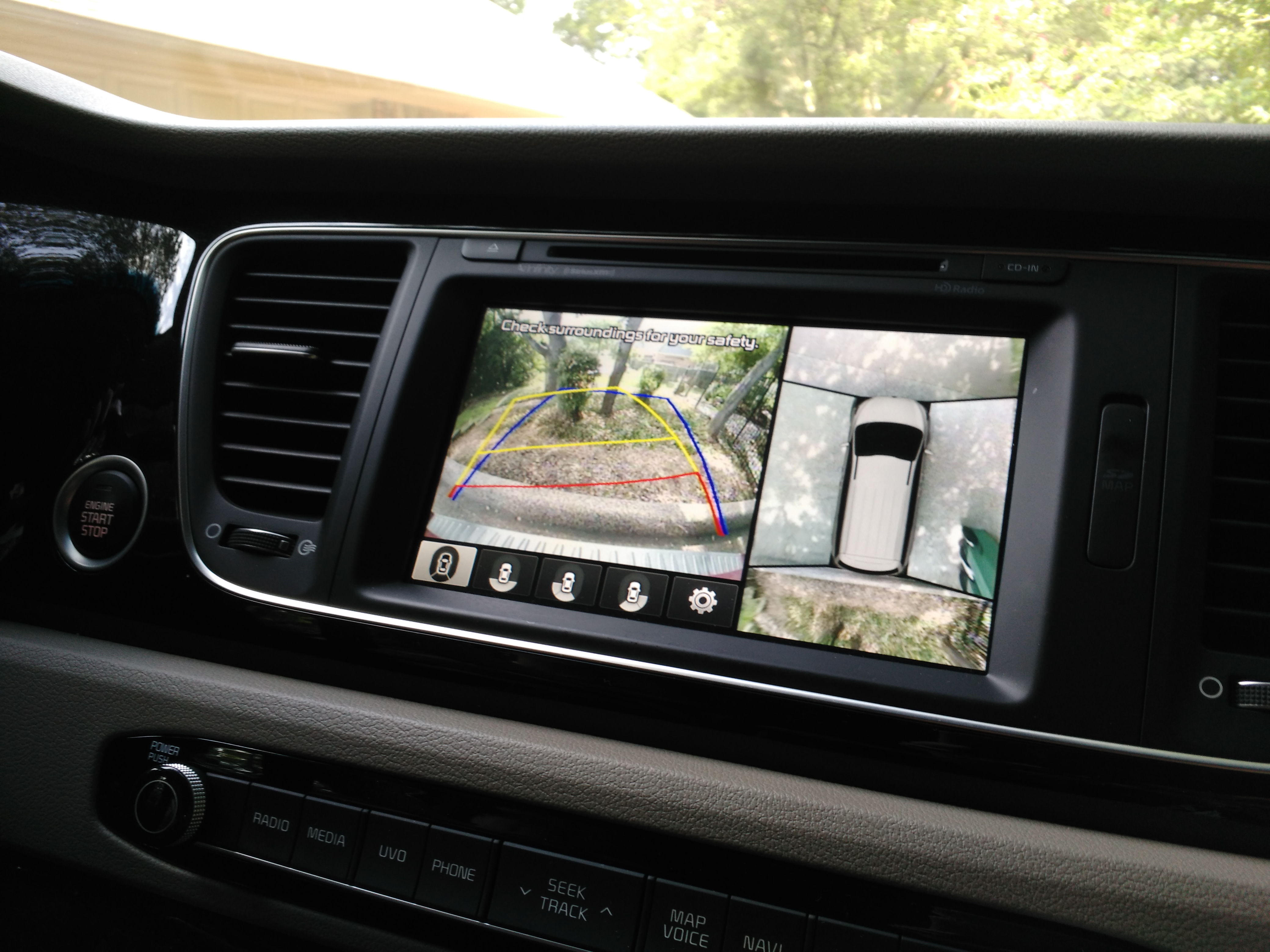 Hands down this was the favorite and most used feature of the vehicle the week we borrowed it.  My husband found every opportunity he could to use it 🙂  I definitely want this feature on the next vehicle I buy, no matter what it is, because I felt like I could park the Sedona SXL on a crowded European cobblestone street with this camera.  (If you’ve ever had to do that, you know exactly what I’m talking about!)  The dash display that supports the surround view, also uses the UVO eServices that you can pair with your smart phone and has a great navigation system. 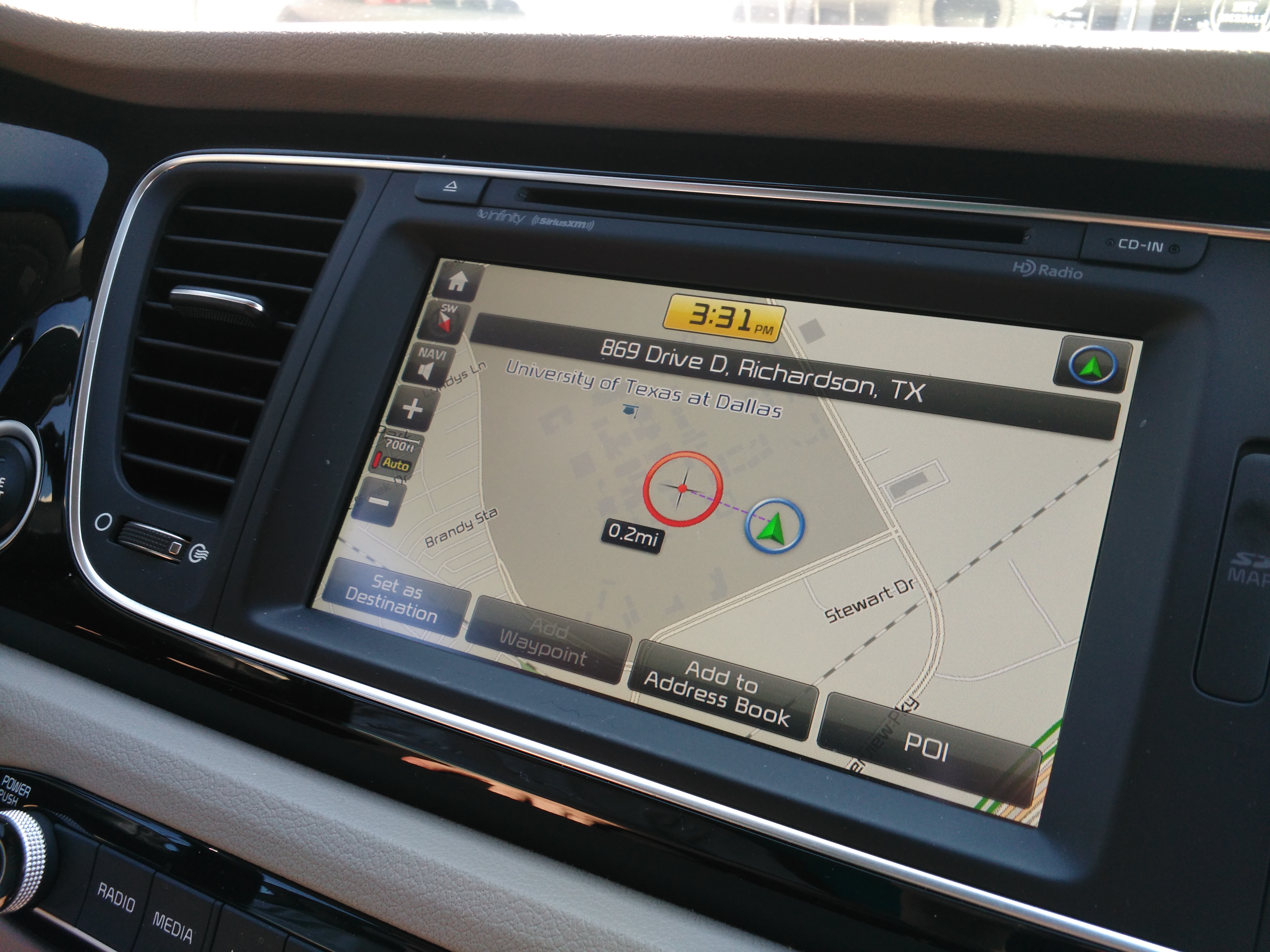 One thing that really impressed us when driving the Sedona SXL for the week was the abundant safety measures built into it.  While backup cameras are now becoming standard on all vehicles, the Sedona SXL comes with a Premium Back-Up Camera.  Together with the surround view mentioned above the Front/Rear Parking Assist System and the Rear Cross-Traffic Alert, means that you can optimally park the van without fears of collision.  The Blind-Spot Warning was interesting to see implemented while we were driving and  went off more times than I care to admit 😉  But just goes to show you that it works!  Optional equipment that can be installed as part of the SXL Technology Package to further enhance your family’s safety are, the Lane Departure Warning System and Forward Collision Warning System.  I don’t remember any of the other newer vehicles that we have driven in the last year that has had so many safety features.

More awesome than you might think, is the fact that Kia has videos online to help you out with configuring your Sedona SXL.  For those of us that need to “see” things in order to accomplish them because the manual can only help us so much, well this is ingenious in my opinion.  One watch through how to move the seats and we were shifting them around like we had owned this van for months.

There were only a couple of things about the vehicle that we found on the ‘con’ side (if you want to put it that way).  The Sedona SXL is a beast in size and with that comes lower gas mileage.  My guess is though that most people in the market to purchase a mini-van don’t have gas mileage at the top of their list.  We were getting not quite 18 mpg doing our city driving. 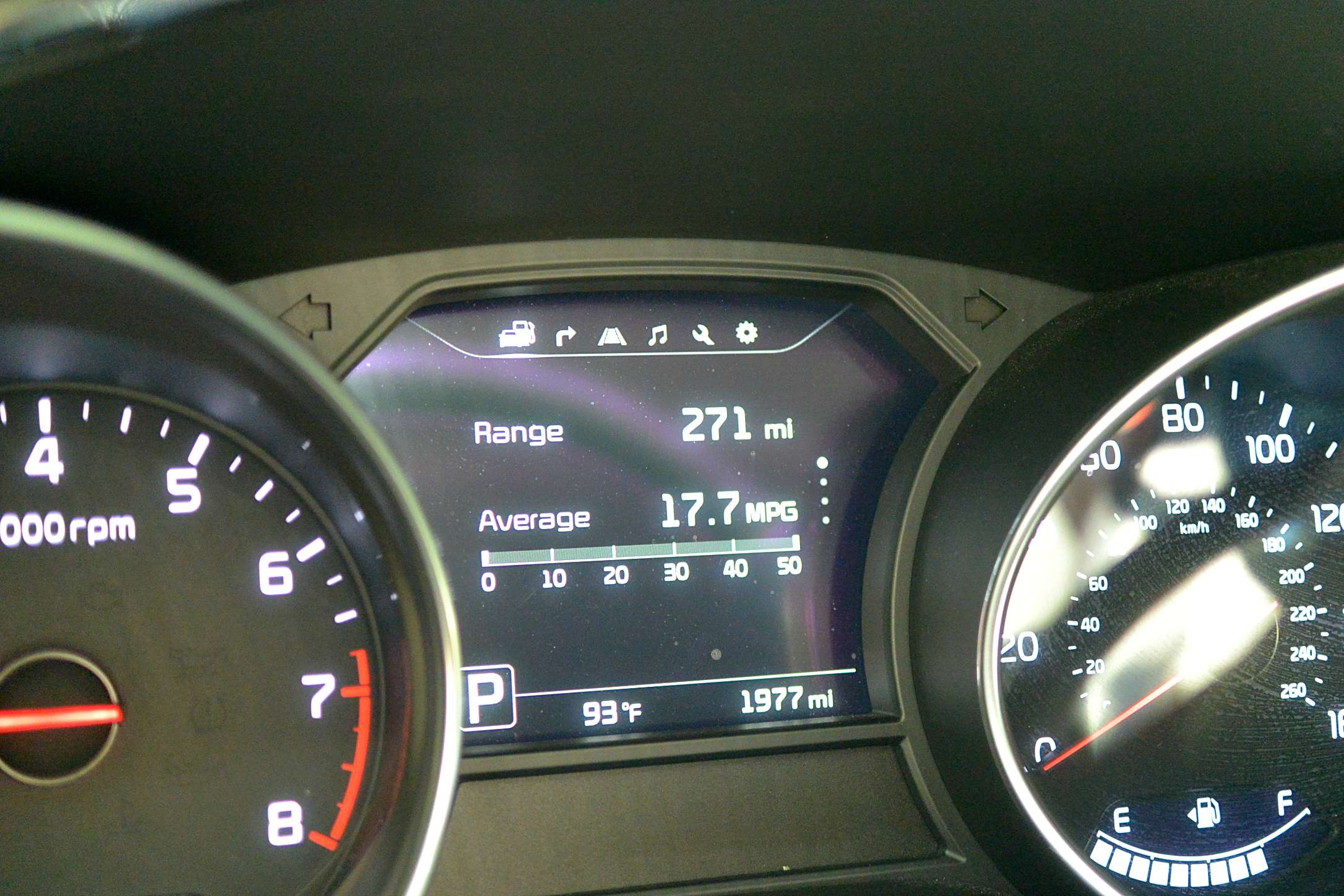 Also was the ‘memory’ of the driver’s seat for the last person to drive it.  We found if you don’t use the programmed memory set buttons for the driver’s seat, when you turn the van on the seat automatically adjusts to the position of the last person who drove it.  Not so much of a problem for me when my husband last drove it to readjust…but for him, well he’s 6’0″ and I’m 4’9″… let’s just say his legs got squished a couple of times 😉 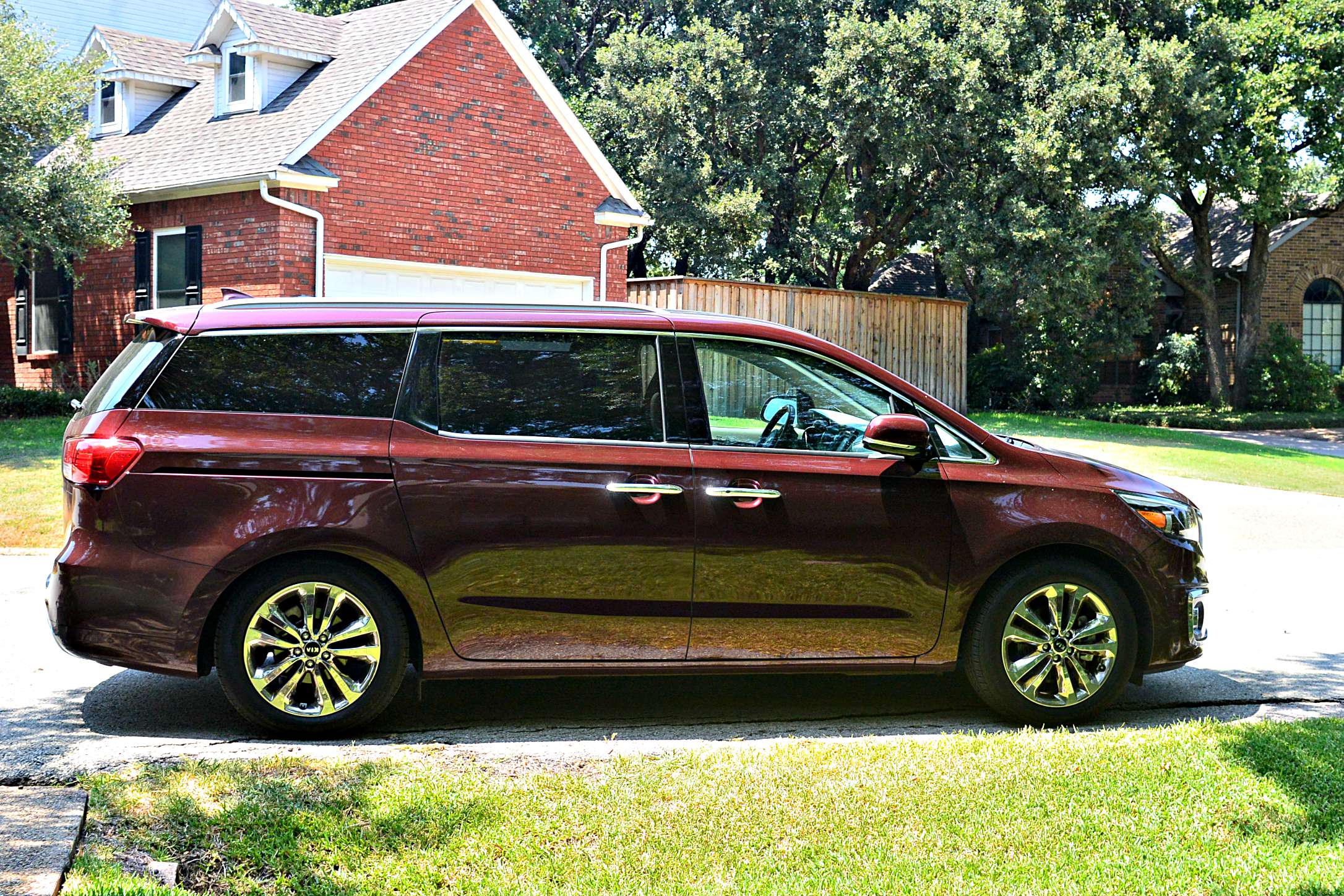 All in all we thought the Kia Sedona SXL would make a great family vehicle for those looking for one with its size and flexibility.  The specific van we drove comes in with an MSRP of $43,295.00.  You can find out more about it and the features it offers, as well as find your local Kia dealership to test drive one if you are interested on Kia.com.