Streaming music or playing a library of songs is one of the fastest ways to drain the battery life on a smartphone. But, while camping in the woods, relaxing in the backyard with friends or enjoying nature in another way the only music source available could be a phone. Secūr Products has created the Solar Media Player, a zippered speaker with a built in solar panel, to protect and charge phones in any outdoor situation without missing a beat. 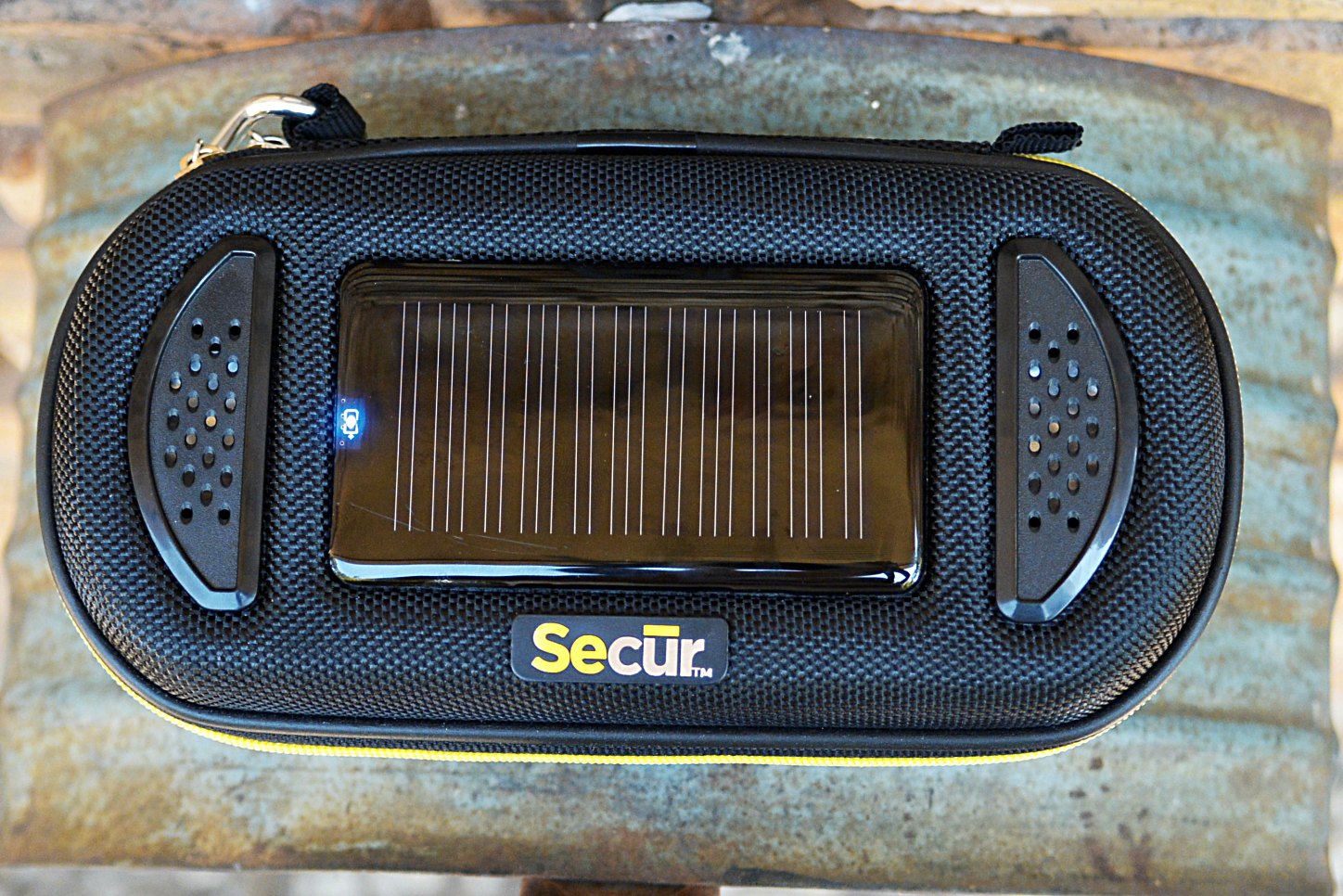 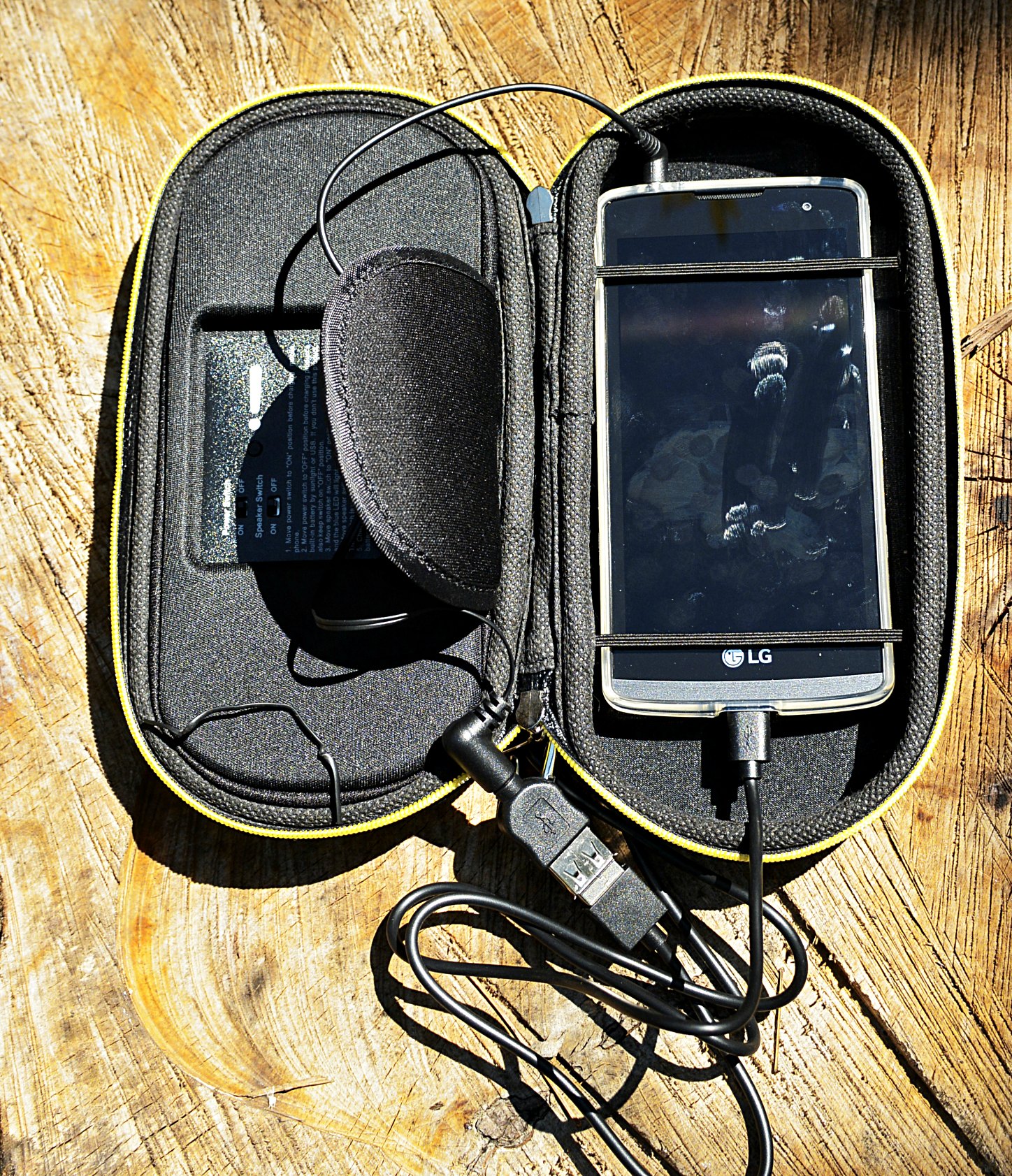 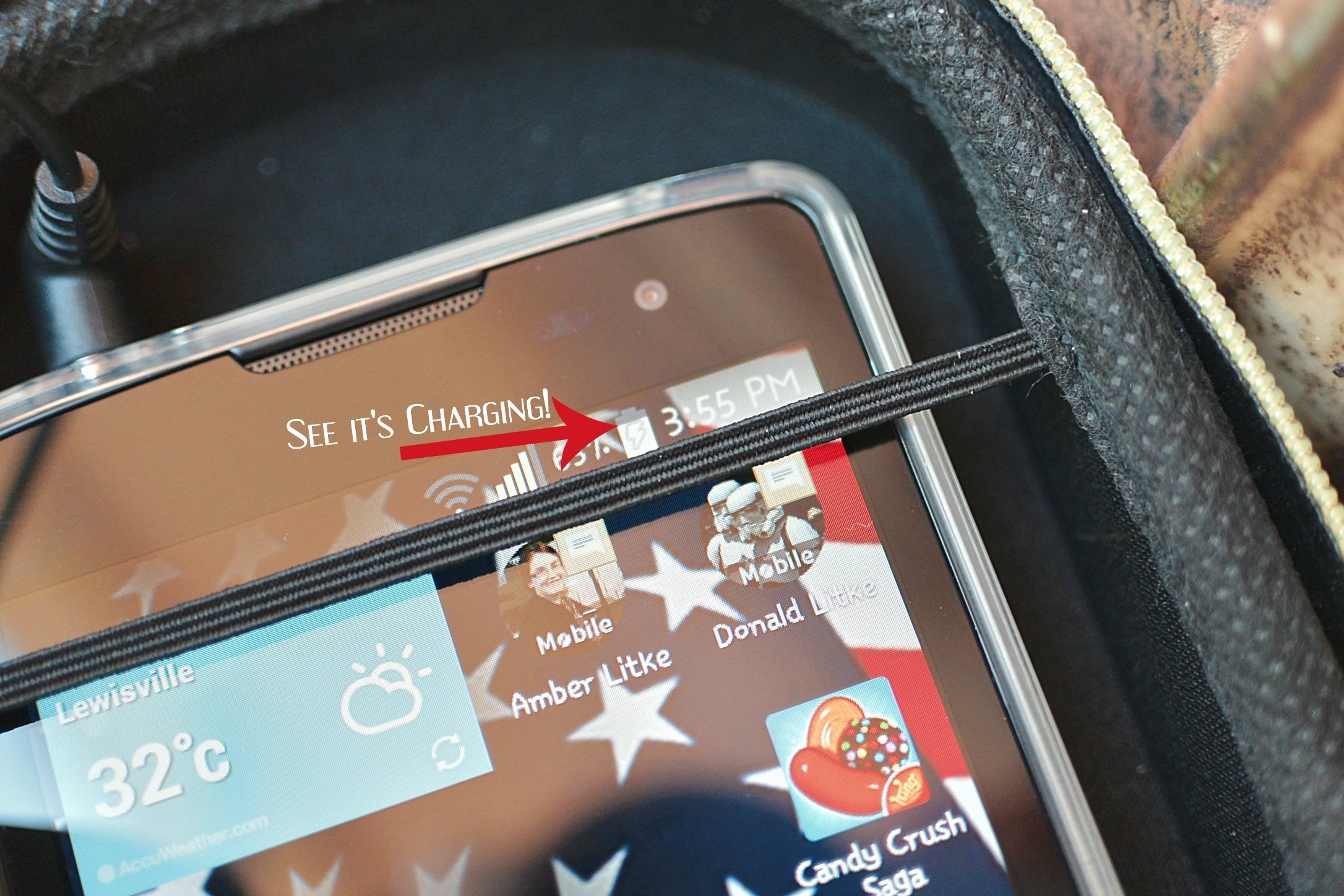 The Solar Media Player is rainproof, dust proof and shock proof. Once a smartphone or MP3 player is safely stowed inside, it will be protected from the elements and accidents.

The 7.28 inch by 3.74 inch by 1.77 inch Solar Media Player is large enough to hold most smartphones including the iPhone 6 and Samsung Galaxy S5. It features two 3-watt stereo speakers, a built in 2000 mAh power bank and a 5.5V solar panel.

When a phone is connected to the Solar Media Player it can draw power from the power bank, or the solar panel can charge both the phone and the power bank at the same time.

Other features of the Solar Media Player include a battery light indicator and a carabineer that can be used to hang the speaker. 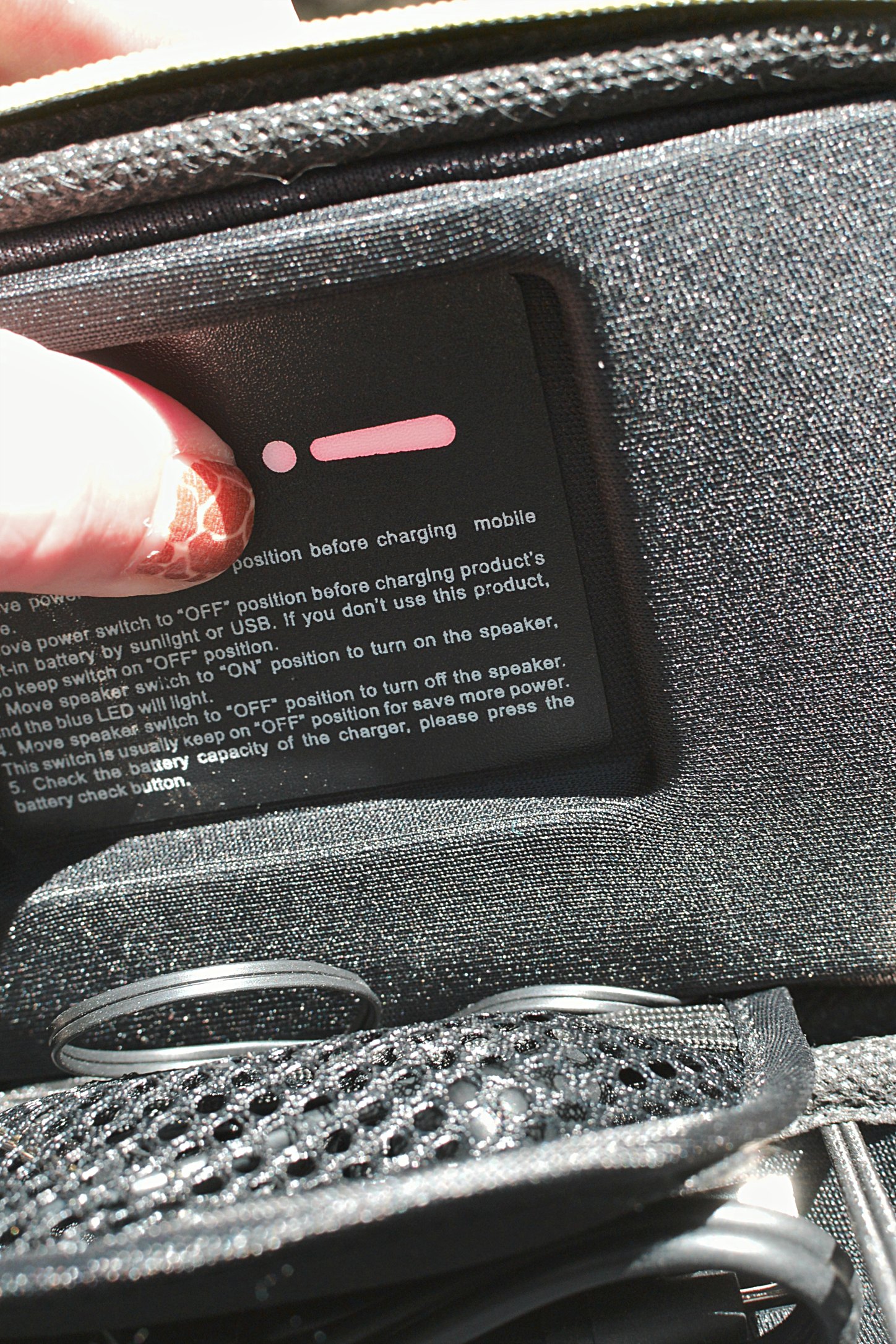 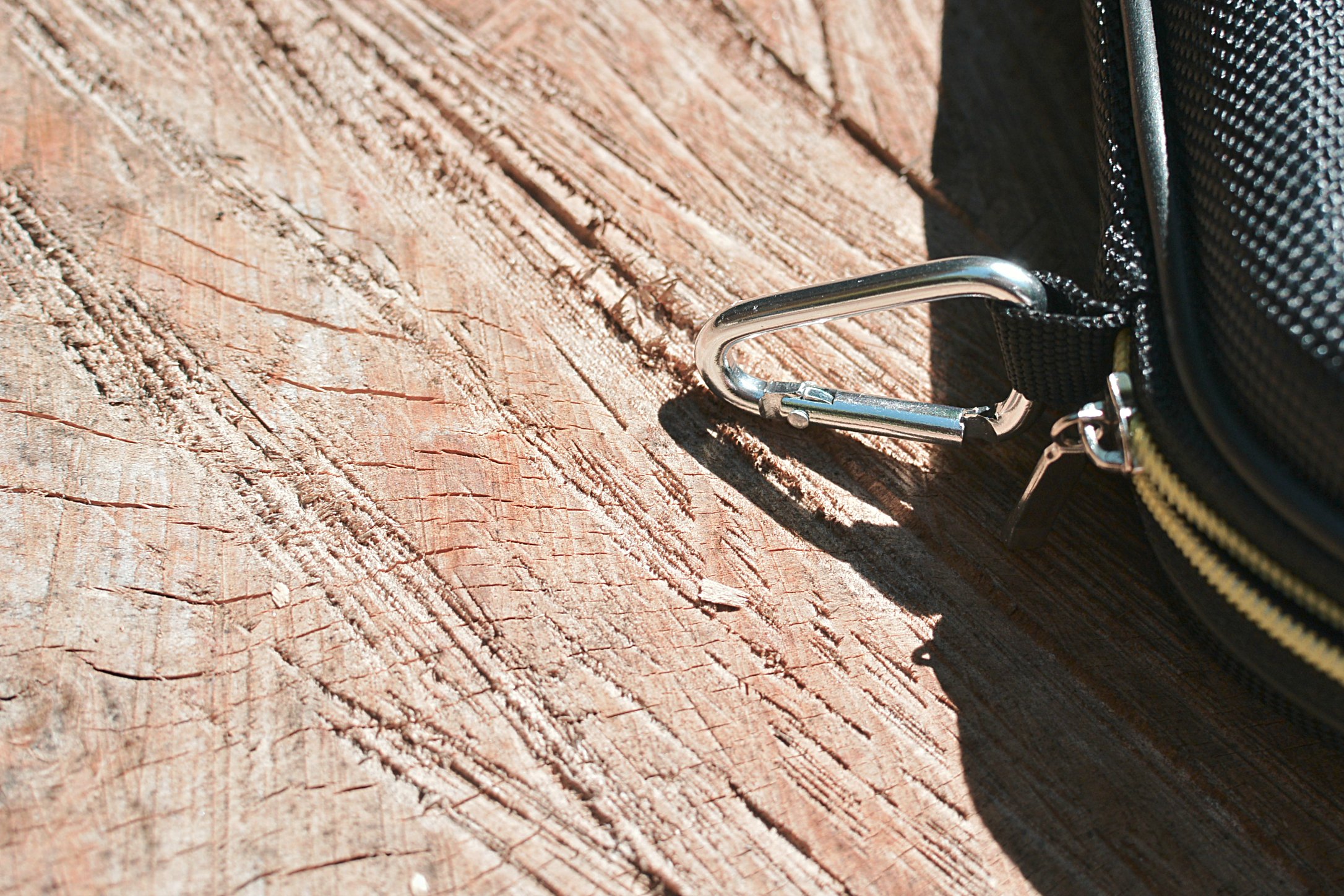 The Solar Media Player isn’t that compact, but it’s definitely portable.  It weighs about 1/2 pound and easily fits into any tote or bag providing you with instant power for your phone.  I have a small hoard of battery back ups for my phone and tablet, but this is the only one I’d be able to rely on if my power was out for more than a day (assuming I could find some sunlight somewhere 😉 ).  This is the ideal phone charger to have around in case of emergency as you don’t have to look for a plug to charge it if you have access to sunlight.  You can also charge the Solar Media Player with any external USB power source. 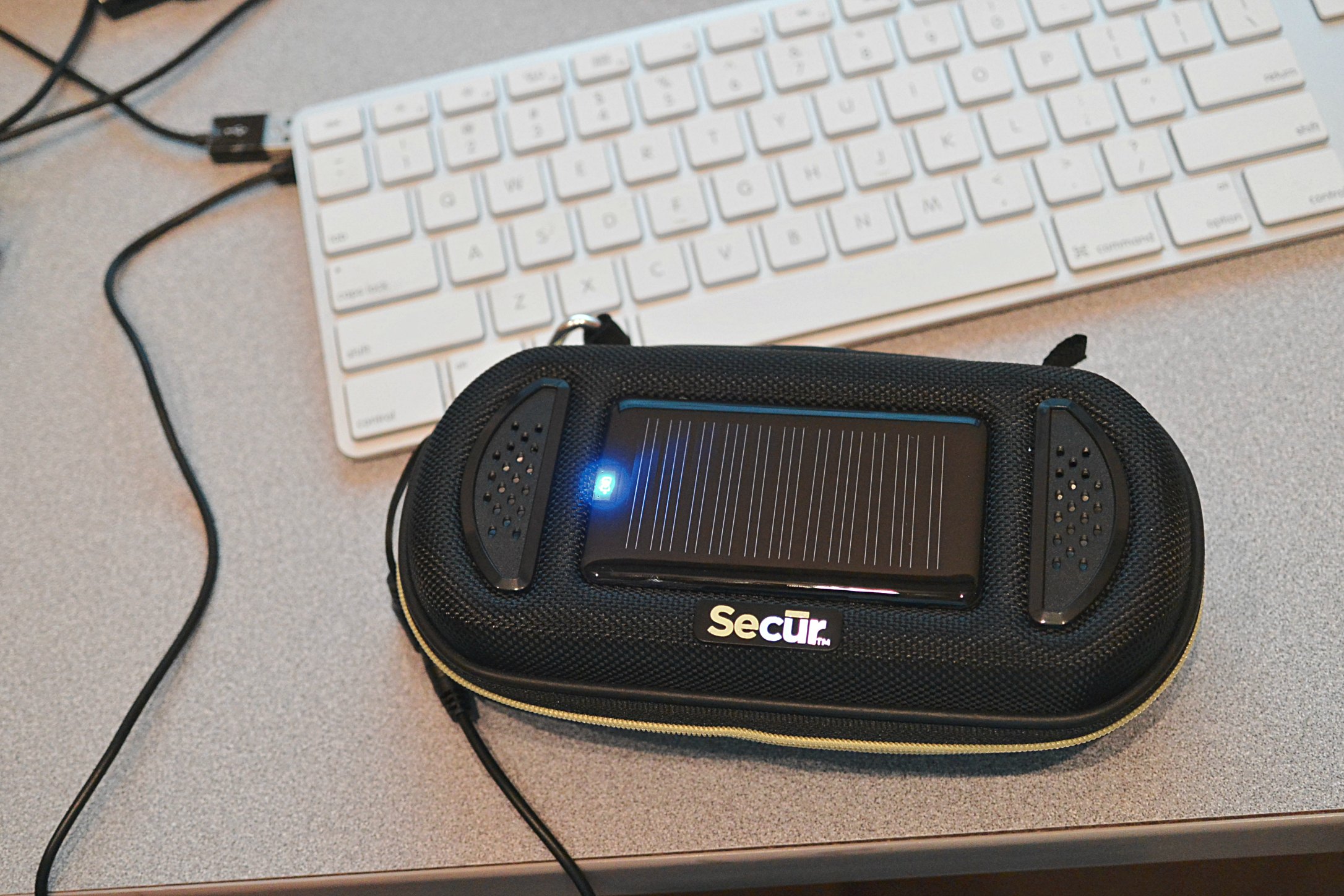 You’ll want to initially charge the case with a USB power source (it takes about 4-6 hours to completely charge it), and then in the future if you charge it with sunlight it takes about 25-30 hours with the solar panel.  Once it’s fully charged this solar powered phone case can charge a phone in about 3-4 hours and provide about 24 hours of battery life when the phone is in standby, or 60-90 minutes of talk time.

The case is also equipped with overcharge protection, effectively extending the battery life of the devices it charges.

It’s nice that it duals as a speaker also, although I can’t see myself using them much unless using it as a news source with my phone in emergencies.  I am no audiophile so can’t really say whether they are decent or not, but for what I would use them for (listening to music at the park or streaming news/weather in an emergency with my phone), they certainly were good enough.

All in all I think this the Solar Media Player is worth having around simply for emergency power to your phone should you lose power, or for when you are somewhere where outlets aren’t accessible for charging.  Camping, hiking, etc.   Not only can you give your phone a boost of juice should you need to to use it and run out of traditional battery back up sources, but it protects it from the elements like dirt, sand, and rain also.

The Solar Media Player has an MSRP of $49.99. For more information visit www.securproducts.com.

*A media sample of this product was received for the purpose of this post.  No other compensation was provided.