When it comes to driving around town to do some holiday giving and shopping with a huge amount of cargo space plus the latest vehicle amenities, the 2016 Toyota TRD Pro 4Runner performs those tasks with style, especially if the weather has taken a turn for the worse. 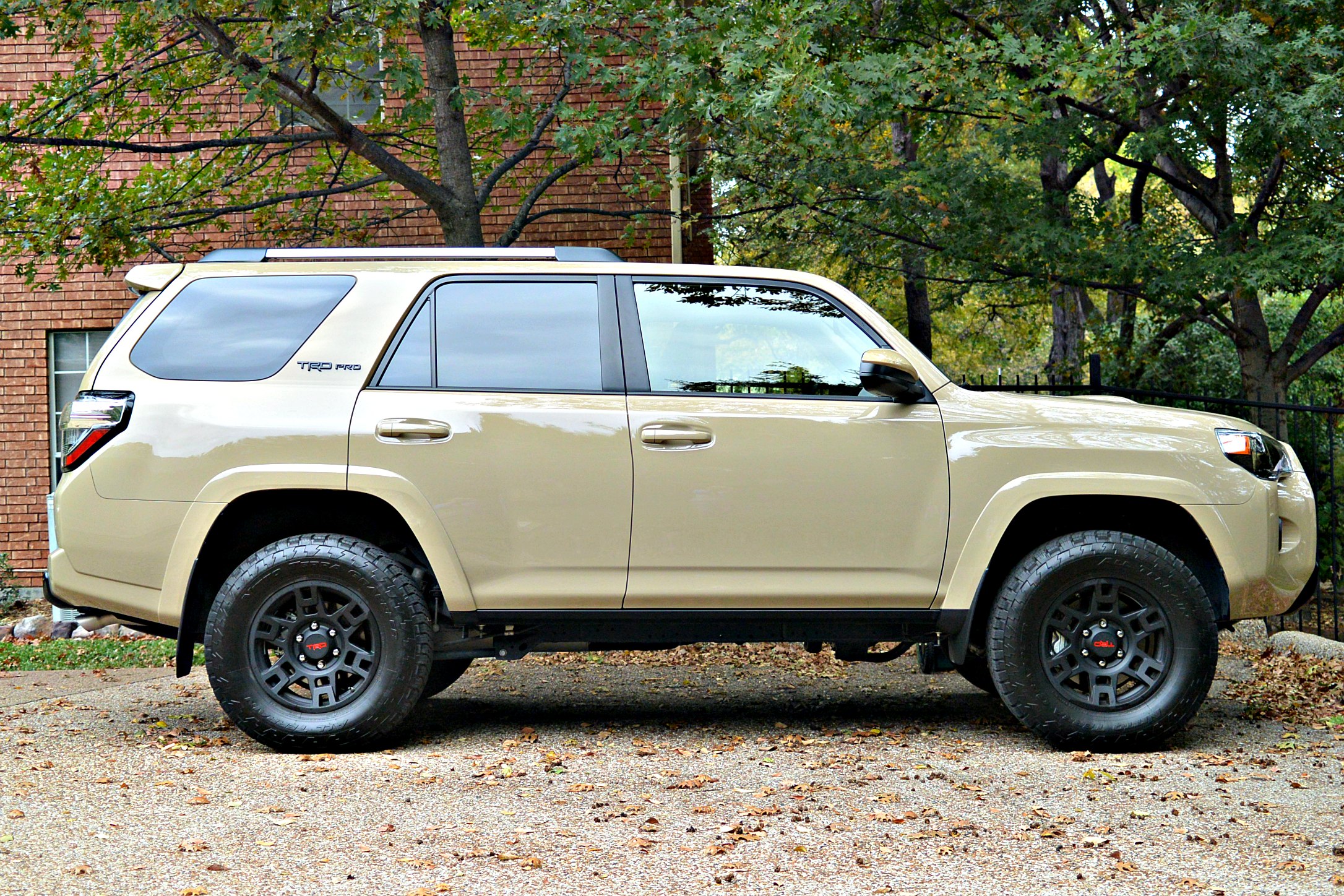 After a week long loan, thanks to Toyota, with the TRD Pro 4Runner, the one thing that stood out above everything else to everyone who saw it was the ‘Quicksand’ paint job.  Kind of funny right? But true!  This color is one of the nicest I’ve ever seen and everyone from the FedEx guy to the courtesy clerk at the grocery store commented on it.

The interior is just as nice. 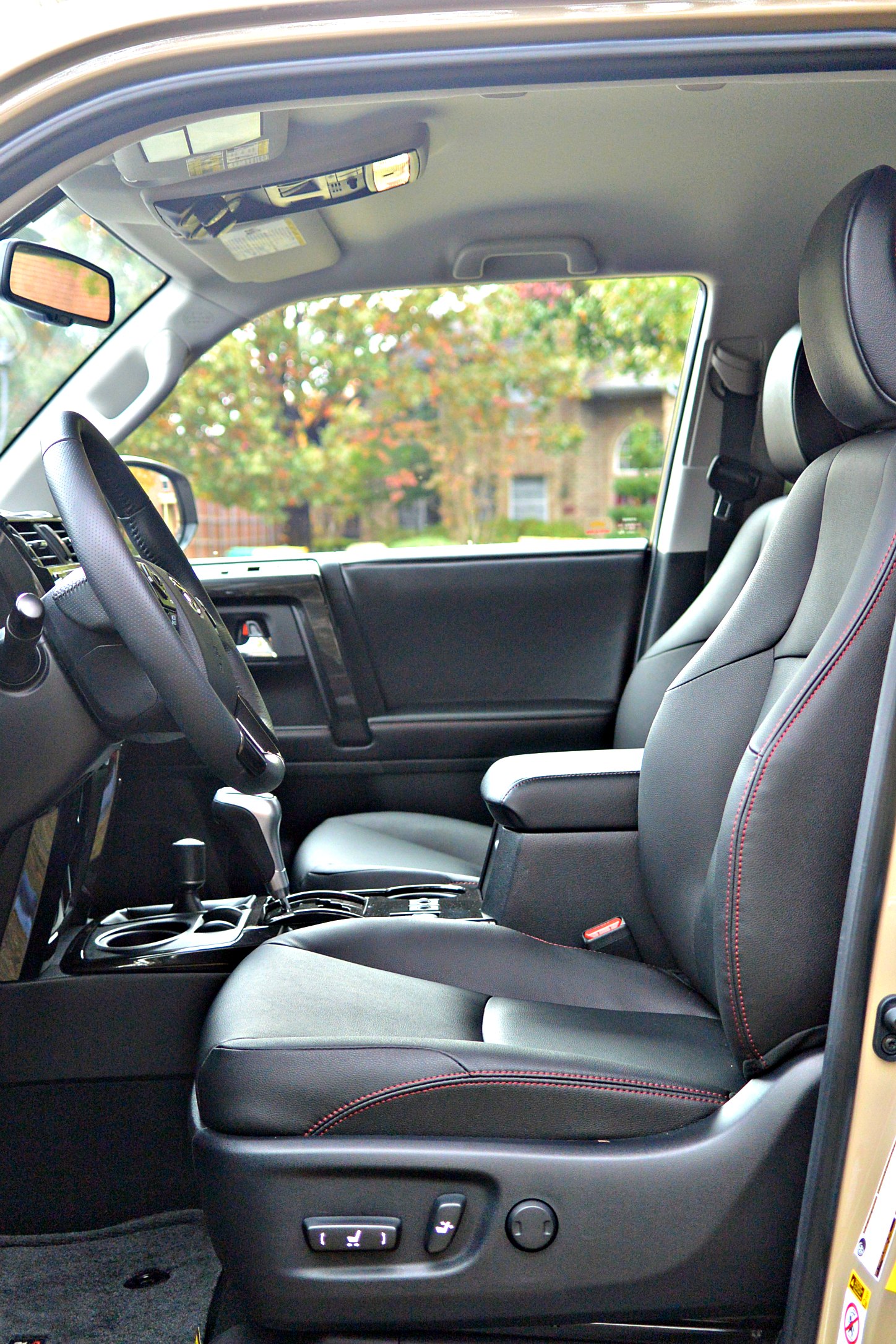 Winter is obviously the coldest season and even here in North Texas when the temperature dropped to the mid thirties we had a chance to use some of the ‘cold weather’ features of the Toyota TRD Pro 4Runner, like the front heated leather seats 🙂  Our behinds were kept nice and toasty as we were riding around doing our errands. 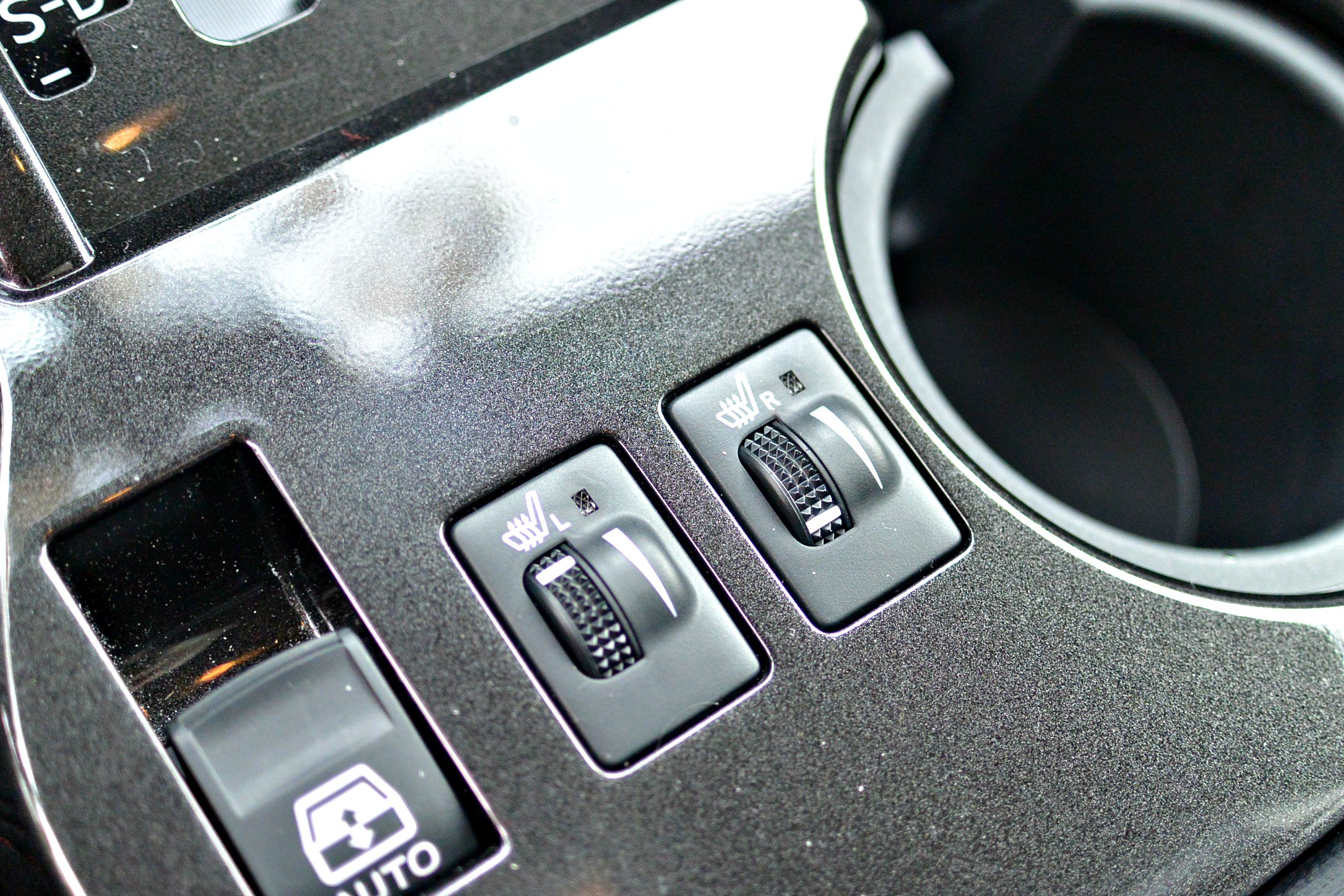 While we had the Toyota TRD Pro 4Runner we were able to spread some holiday cheer.  First we loaded it up to with a new mattress and bed frame which we took to our daughter at college.  She had been sleeping on a not so great one for nearly the entire first semester so we thought we’d make her nights a bit better by getting her a memory foam mattress instead of the plastic one she had.  This was made SO easy with the sliding rear cargo deck. 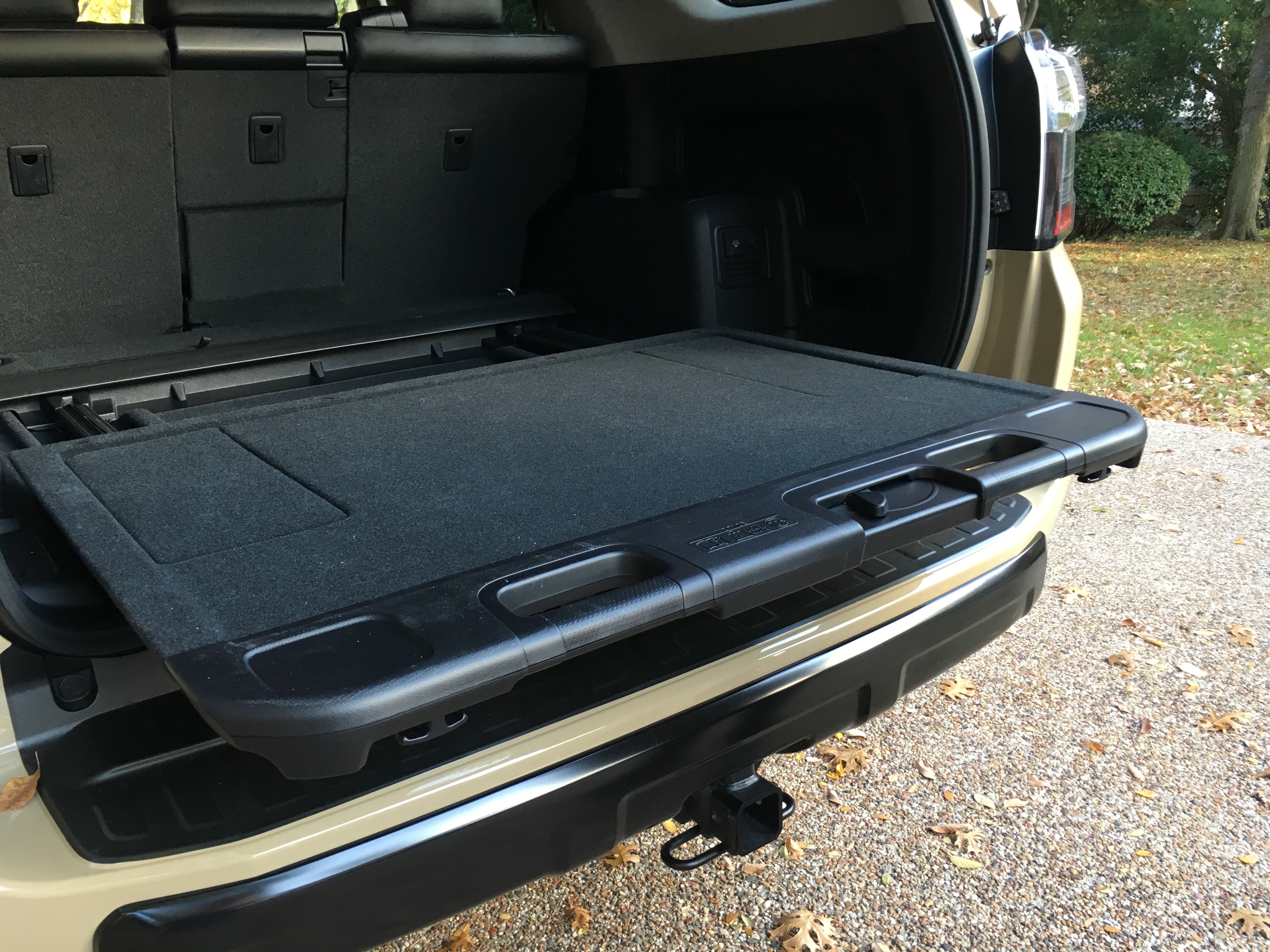 Being able to slide out the deck, load larger, heavier items on it and then slide it back in makes holiday shopping effortless!  Combine that with the 40/20/40 split rear seats that you can fold down and you can fit just about anything in the 4Runner.  I think the back was nearly just as full with the things she decided she needed to bring home for Thanksgiving break! 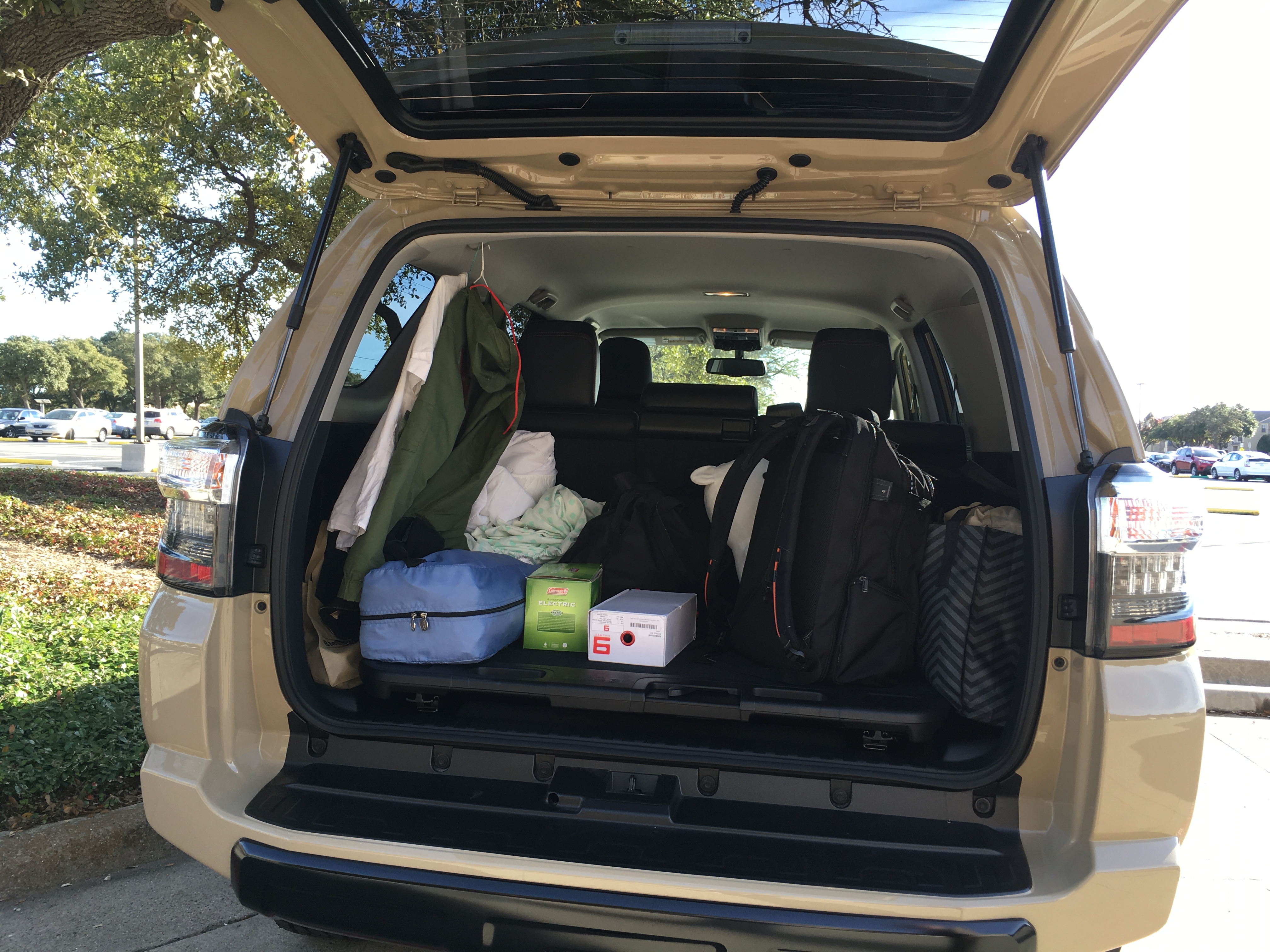 We had plenty of room for the turkey and all the fixings when we went to the grocery store too. 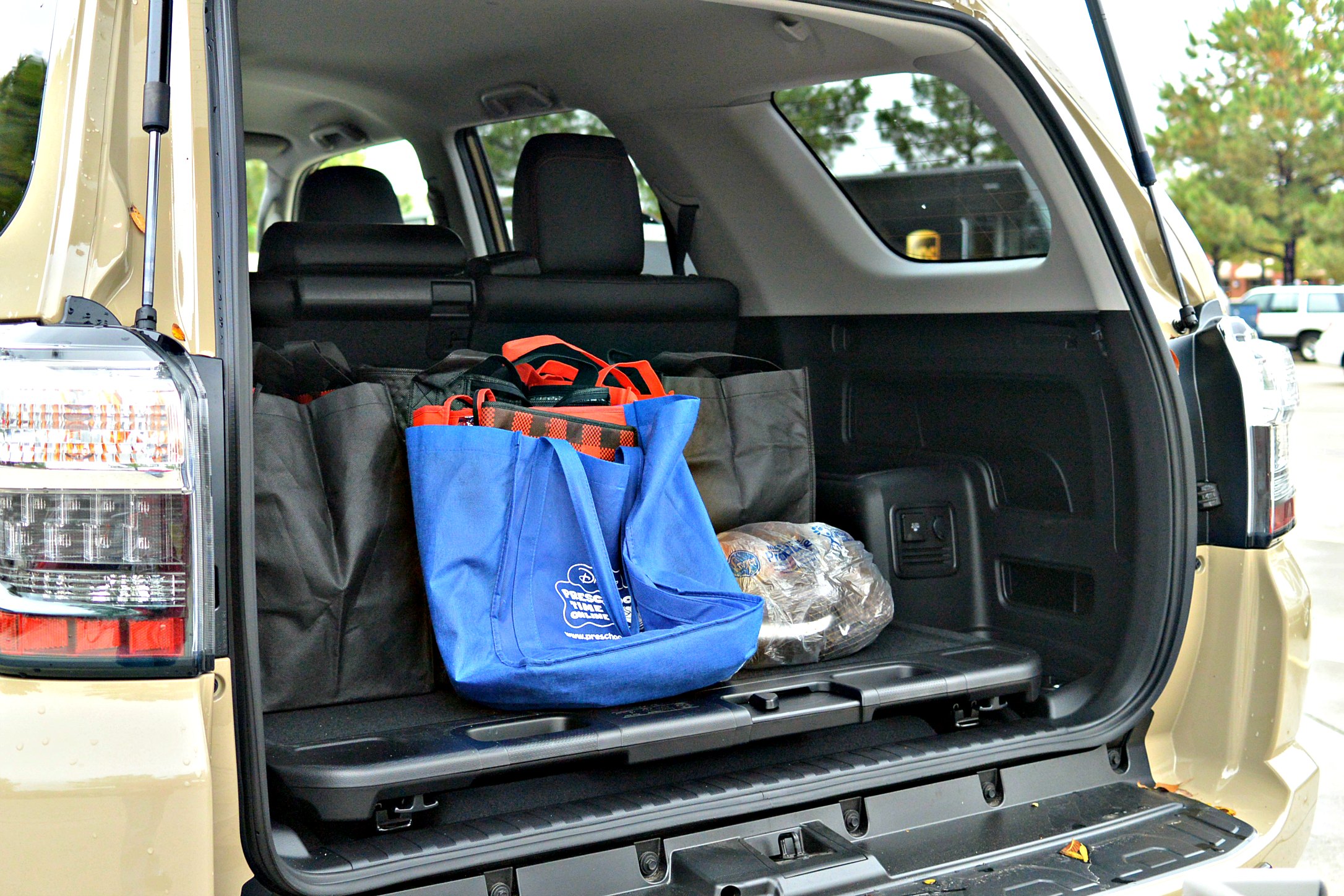 We were also able to deliver some shoeboxes for Operation Christmas Child with the TRD Pro 4Runner. 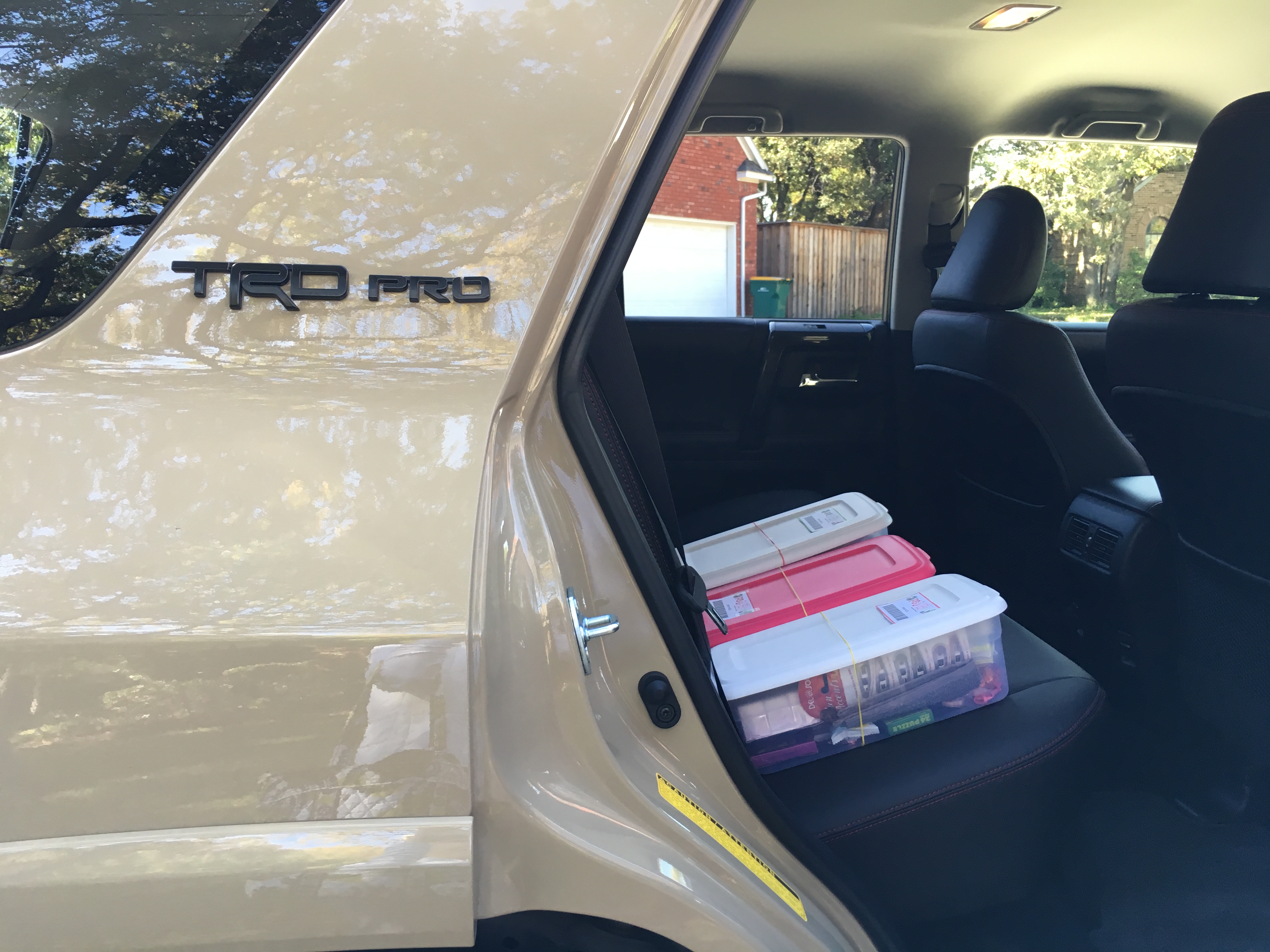 And thanks to a gift card that Toyota gave us along with the 4Runner, we were able to treat an elderly couple to some Starbucks as well when we were out and about. 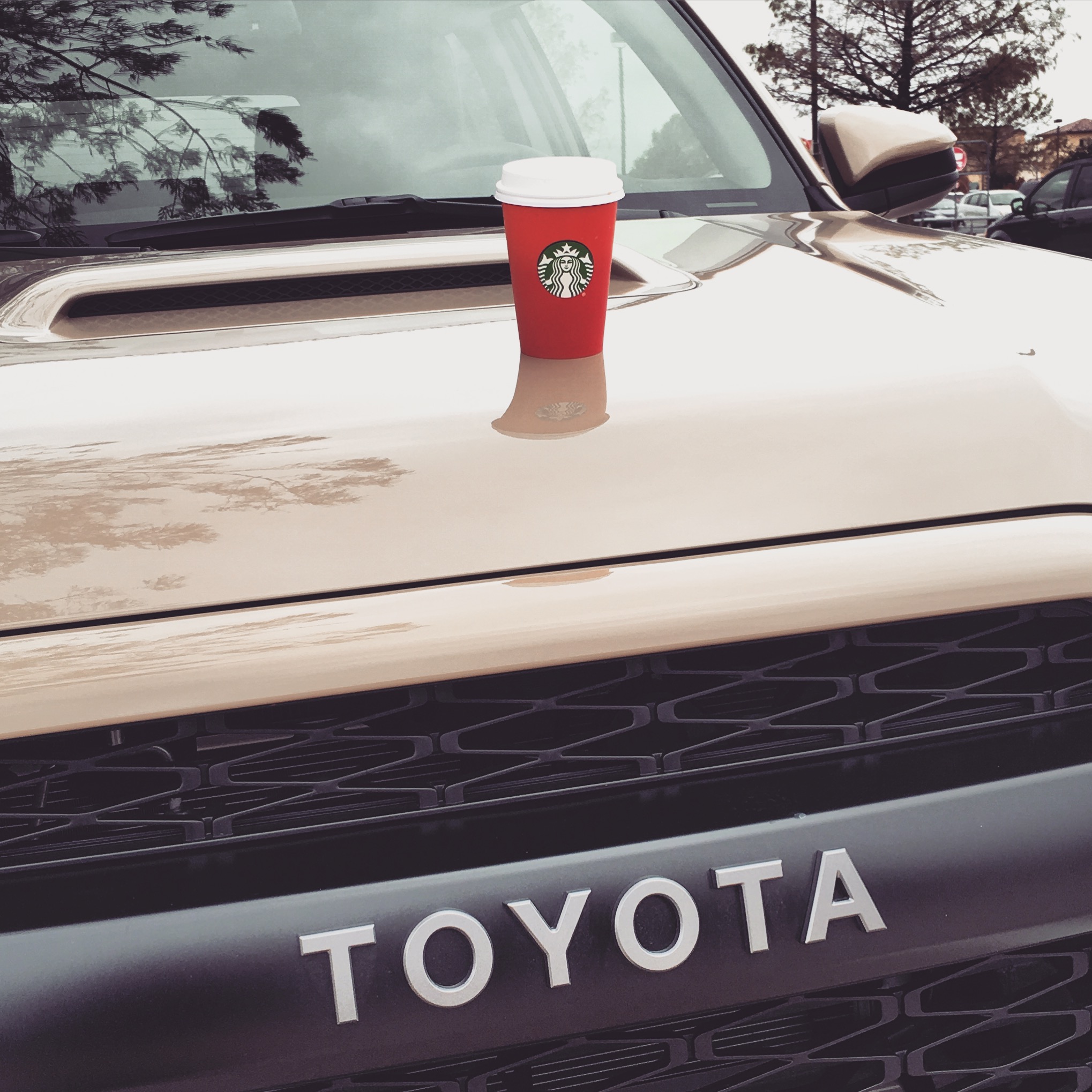 When first driving the TRD Pro 4Runner I admit to being a bit frustrated.  I found some of the things I use most in my own vehicle in awkward places or not intuitive.  Like the placement of the cruise control or the way the windshield wipers worked. 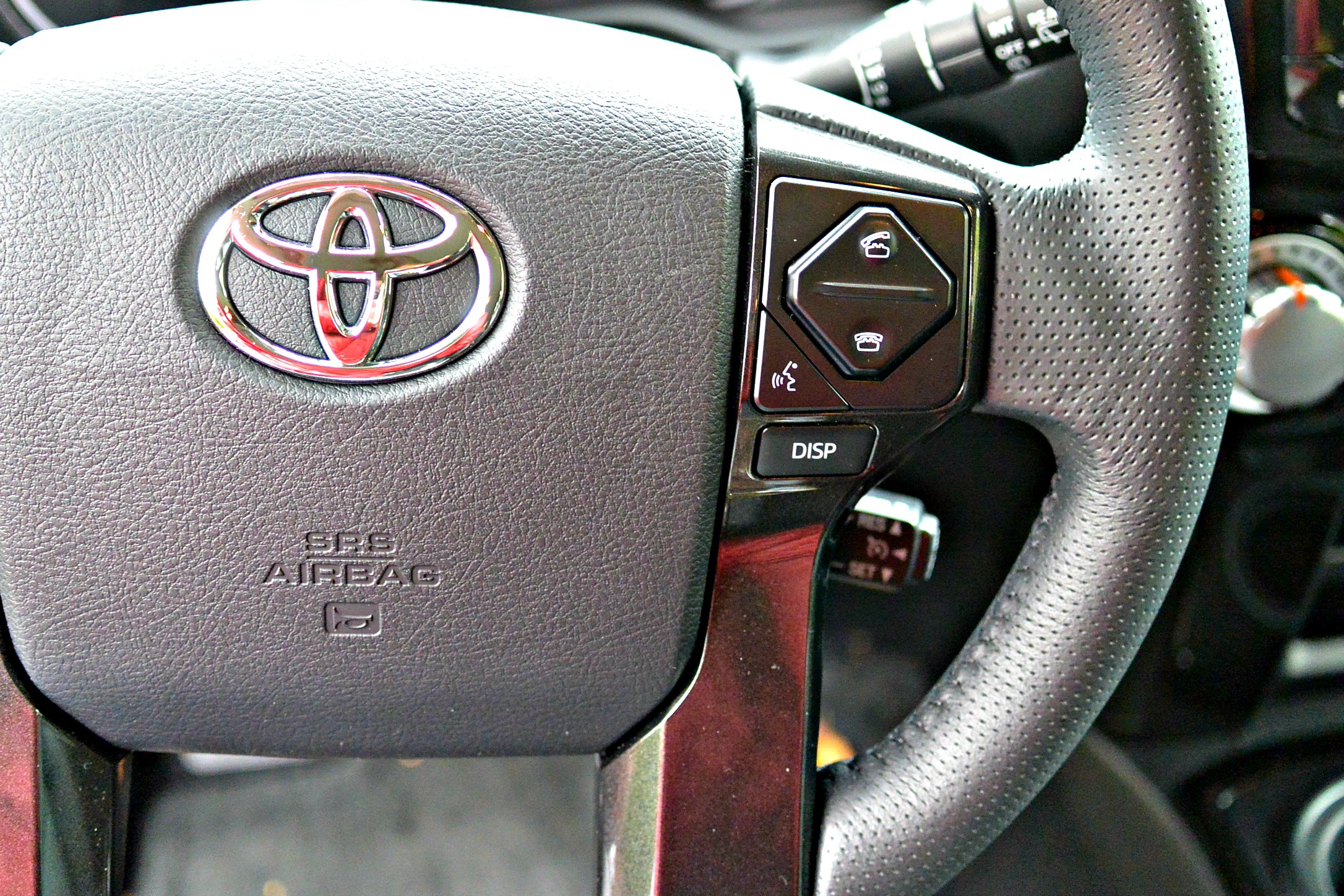 After a couple of days however, I realized that they actually worked just as they should and were in handy positions after all.  Like any vehicle that is new to the driver, much of what someone does or doesn’t like is often just because they are used to something different.

Surprisingly enough even though the 4Runner is a bit of a beast compared to what I drive I had no issues parking or maneuvering it, even without a 360 degree camera or lane departure.  It does come standard with a back up camera with projected path. 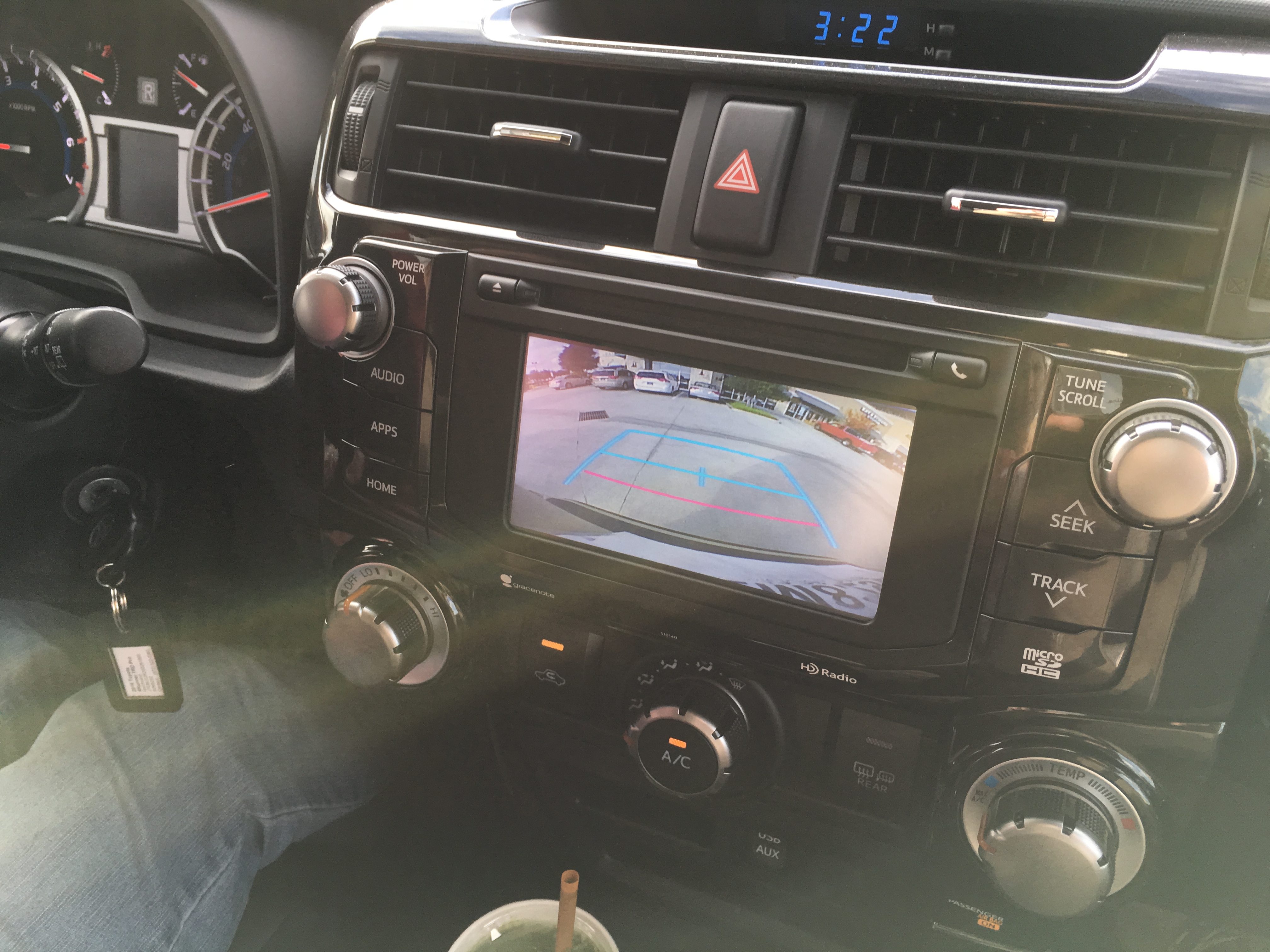 Where the Toyota TRD Pro 4Runner shines though is with its ability to take on all kinds of terrain.  So with only having driven it in the city, we obviously didn’t take much advantage of this feature (okay not at all), but wow, look at these 17″Alloy Wheels – these are serious off roading tires! This vehicle definitely “let’s you go places!”  This is my daughter for comparison sake, she’s about 5′ tall. 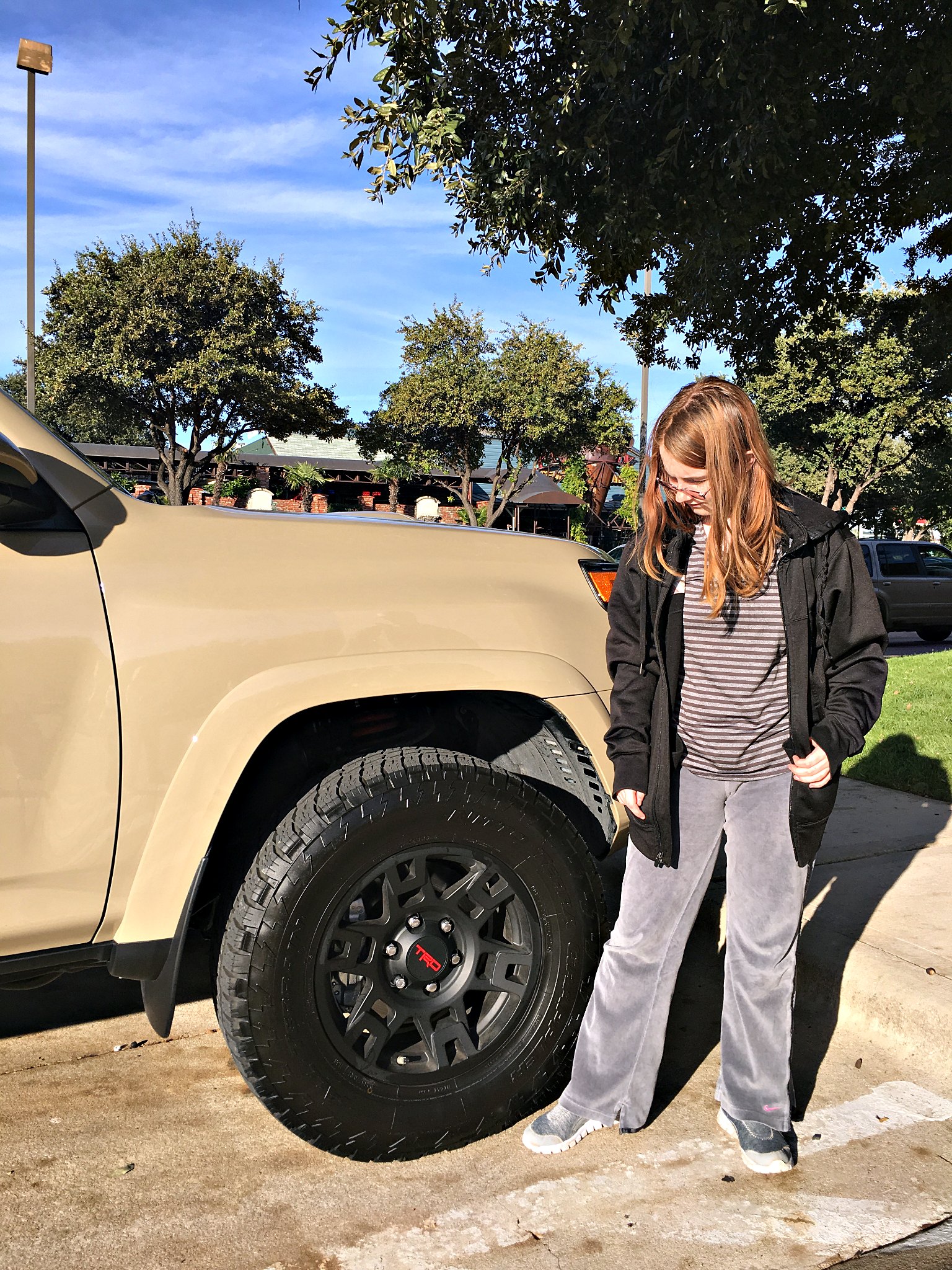 The TRD Pro version of the 4Runner comes equipped with TRD Bilstein Shocks (which was quite evident on the very bumpy North Texas roadways), Part-Time 4WD System with Active TRAC, Multi-Terrain Select and many other features that make challenging roadways and rugged terrains easier to navigate. 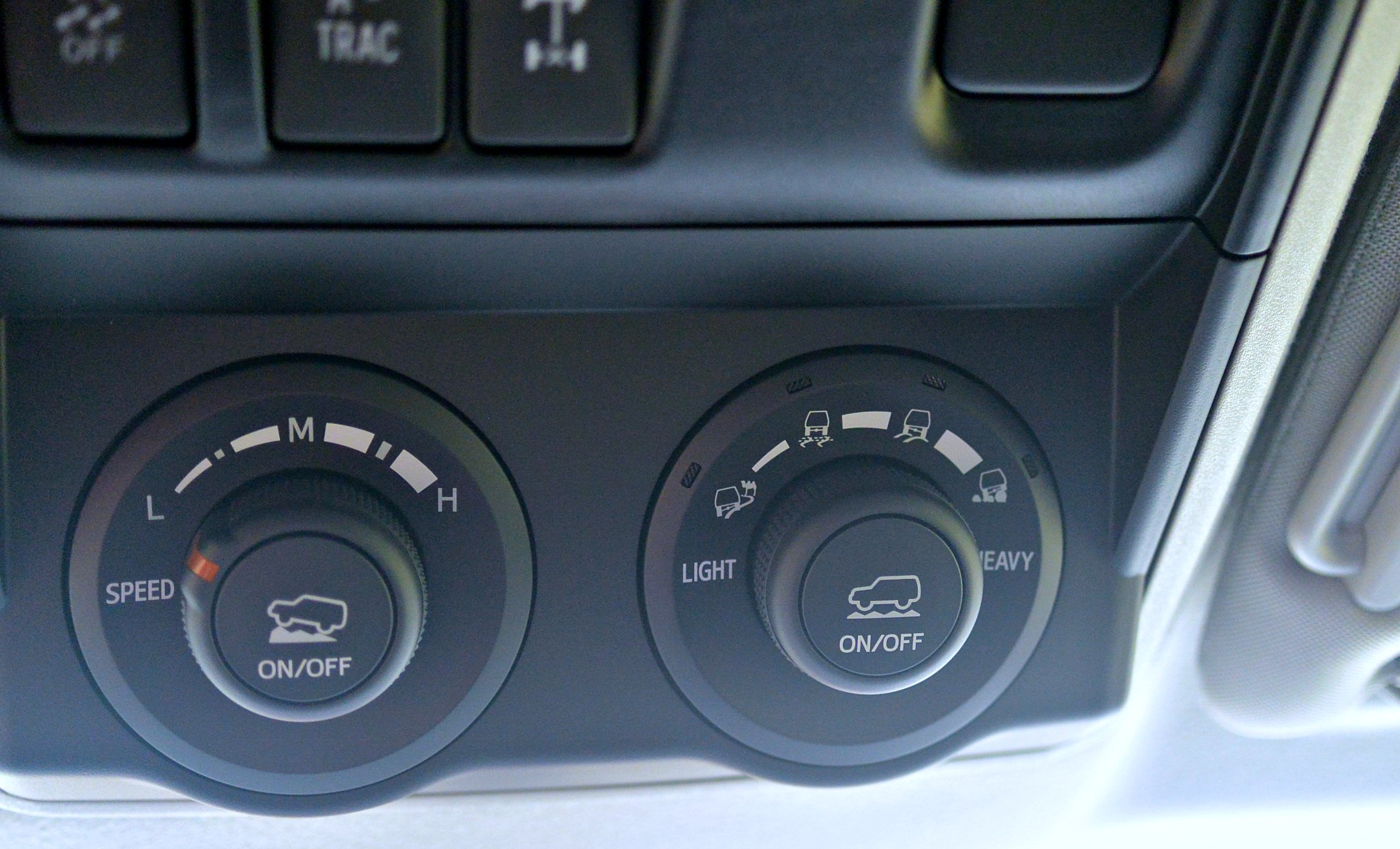 While the Toyota TRD Pro 4Runner is definitely more vehicle than I need for day to day driving, it was great fun to take out for the week that I had it.  Some extending floorboards would have been nice to get in and out of the vehicle.  I’m only 4’9″ tall and it was certainly a bit of a climb to get in and out of it for me 🙂  It drove smooth and took turns well with the power assisted rack and pinion steering.  For those of you curious about gas consumption, it comes in at 18 MPG (17 city/21 highway), but as I always say with these large vehicles, if you’re considering one like this you likely aren’t that concerned with gas mileage 🙂 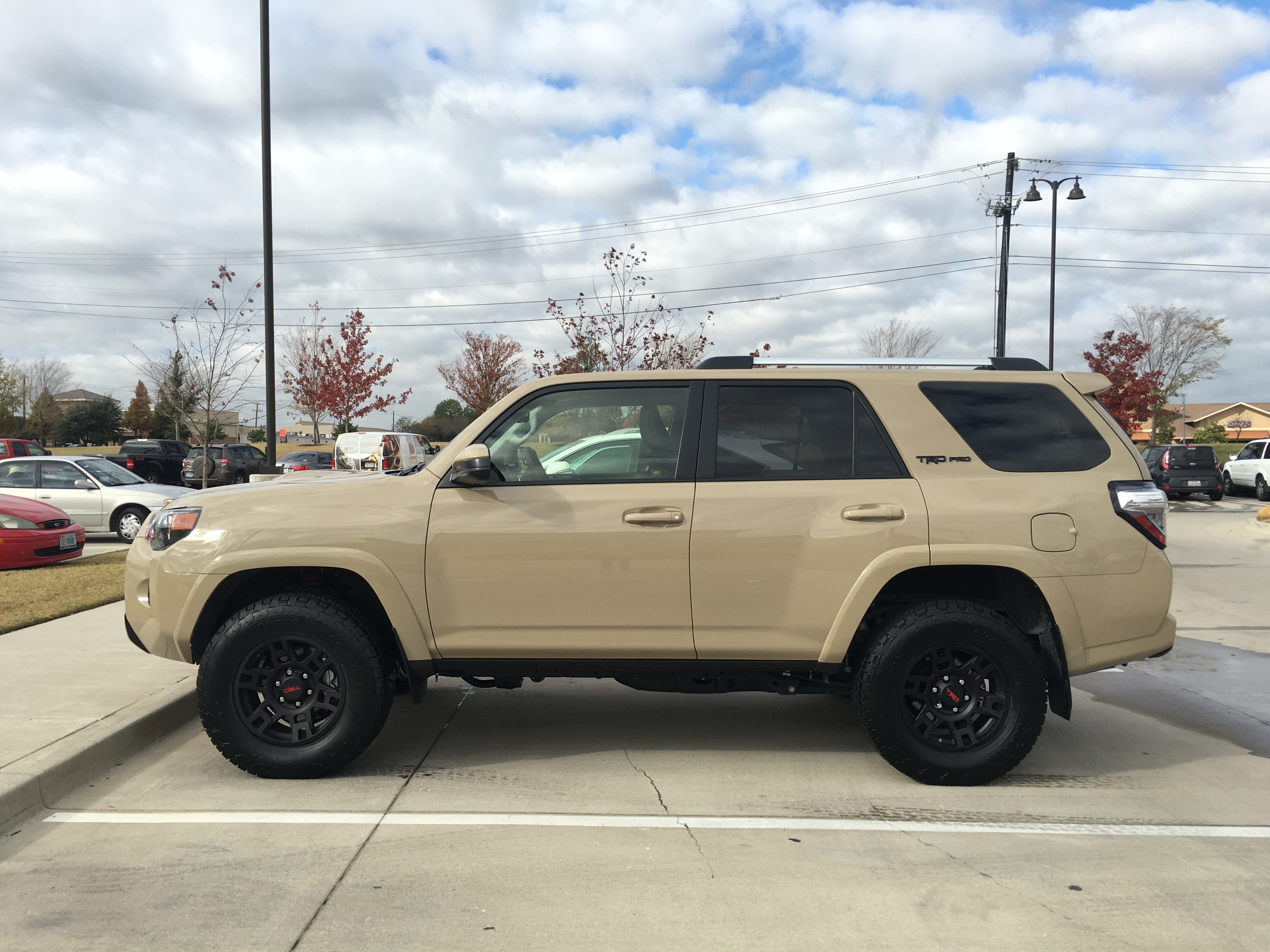 For a family that spends a lot of time outdoors off the beaten path, enjoys taking the scenic route, needs cargo space for all their gear and likes to ride in luxury, the Toyota TRD Pro 4Runner just might be your match.  The model we drove with the optional sliding rear cargo deck comes in at $42,800.  I almost think the Quicksand paint color is worth the cost alone 🙂 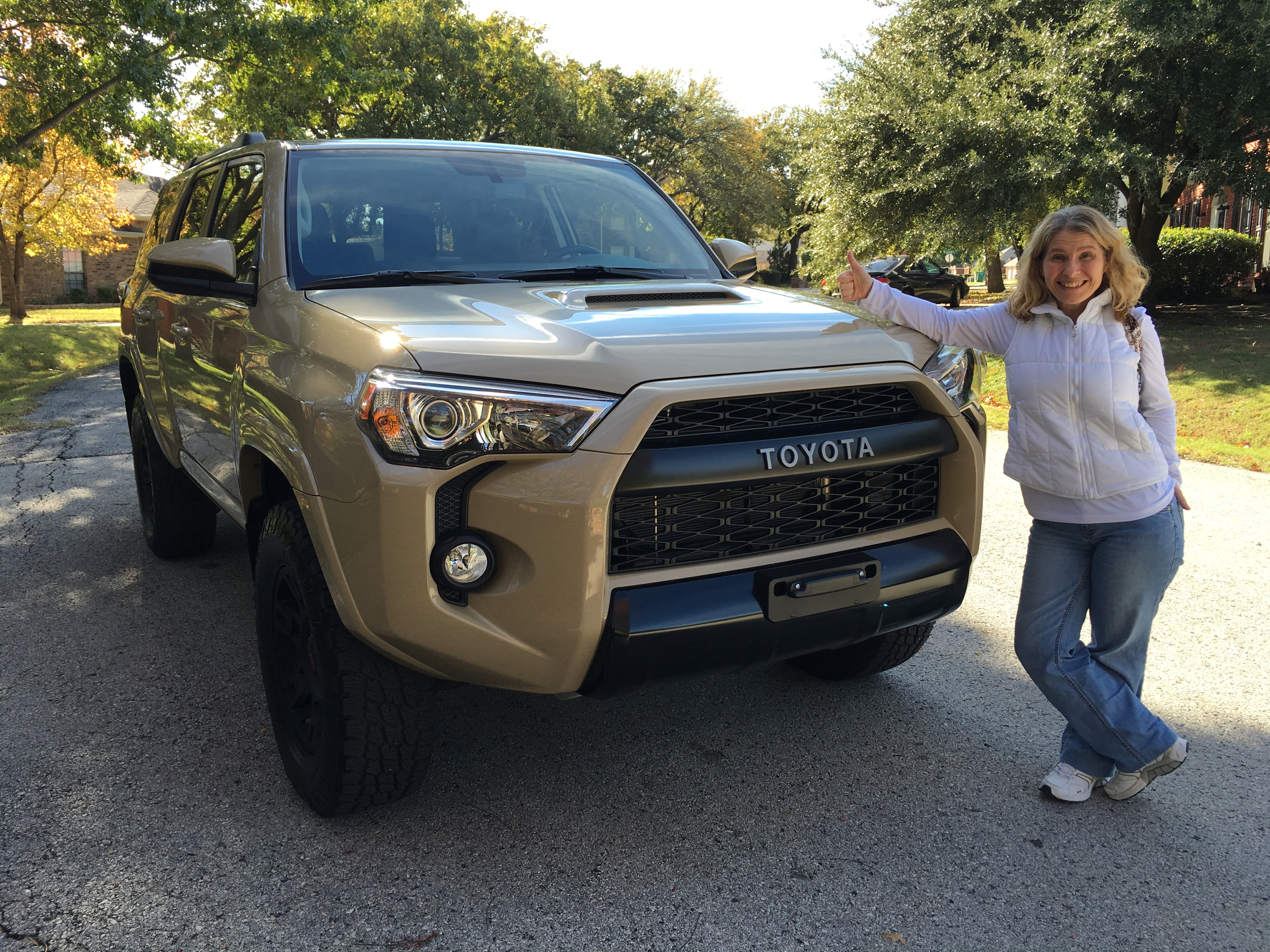 You can learn more about the Toyota TRD Pro 4Runner at Toyota.com.  Let’s Go Places

We use cookies to ensure that we give you the best experience on our website. If you continue to use this site we will assume that you are happy with it. Please note if you leave a comment on this blog, both your e-mail and IP address are captured. You can email us at tammy@threedifferentdirections.com to have that information deleted if you choose.OkRead more